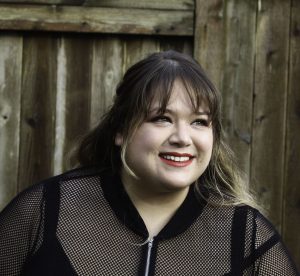 Self-described on her website as “a white-passing, city-raised Indigenous woman with mental illness who has lost her mother,” Francine Cunningham of Vancouver writes about residential schools, intergenerational trauma, Indigenous Peoples sent to sanatoriums, systemic racism and mental illness in her debut poetry collection ON/Me (Caitlin $18).

Originally from Calgary, Cunningham graduated from Creative Writing at UBC and has written for the APTN television show THAT’S AWSM. Her own adventure story called The Slips appeared as part of a 2015 Active Fiction Project set on the streets of East Vancouver and is now available as an e-book from The Vancouver Public Library. Her creative non-fiction has appeared in The Malahat Review, the anthologies Boobs: Women Explore What It Means to Have Breasts (Caitlin Press) and Best Canadian Essays 2017 (Tightrope Books).

Cunningham was longlisted for the 2018 Edna Staebler Personal Essay award and On/Me was nominated for the Indigenous Voices Award – Published Poetry, and the BC & Yukon Book Prizes – Jim Deva Award for Writing that Provokes.

As she told Rob Taylor for Read Local BC, “I realized a long time ago that I live in this in-between place and what I do with my art has to reflect that. Growing up it wasn’t a space that I ever read about or that people talked about. I felt really alone in this space. I felt like the thoughts and feelings I was having were not valid and made me a bad person, a bad Indigenous person. I’ve been working with Indigenous youth for close to fifteen years now and it has shown me that I am not alone in this in-between place.”