The father of BC Anthropology 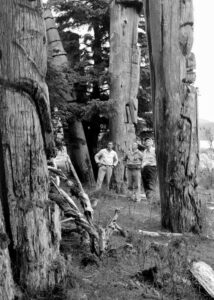 His efforts, along with a select group of other academics & artists in the 1950s and ’60s, brought Pacific Northwest Coast art to the world’s attention.

The meticulously researched biography of one of BC’s most enlightened scholars and museum experts devoted to Northwest Coast Indigenous art, Wilson Duff, Coming Back: a Life (Harbour $39.95) by historian Robin Fisher is an absolute bull’s-eye achievement. 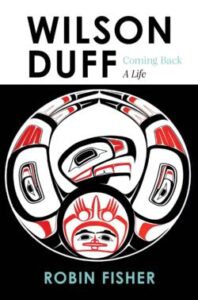 His work ethic and mystical approach caught the attention of world renowned anthropologist and ethnographer, Claude Levi-Strauss. “His profound admiration for the arts of the West Coast was obvious at all times, and so was his anxious need, always unsatisfied, to penetrate their most secret meaning, even beyond the meaning assigned by the artists themselves,” said Levi-Strauss. “He was, one felt, tormented by problems related to the psychology–I would even say the metaphysics–of art.”

Duff was the first anthropologist to be fully employed by the provincial government as its curator of anthropology at the provincial museum in Victoria (from 1950 to 1965). During those 15 years, and later teaching at UBC until his death in 1976, Duff’s career traversed archaeology, ethnography and museum practice. He went straight to the source of his studies through uncountable hours of learning and researching with Indigenous elders and artists, and through decades of field experience studying the structures of aboriginal cultures and spirituality. Yet he came from an unlikely background for someone now lauded as one of the forefathers of BC Indigenous studies.

From a Depression-era working-class family of Ulster stock in south Vancouver, Duff was an introvert achiever and star athlete at Vancouver Tech before joining the RCAF at 18 in WW II.  A navigator on bombing raids against the Japanese over Rangoon and Bangkok he survived, Robin Fisher comments, with a faith in “chants, incantations, charms.”

Back home after the war, Duff discovered anthropology at UBC. He also married his high-school girlfriend, Marion Barber, and following a Master’s degree earned at Washington State, Duff committed himself, Fisher records, to explaining “the colonial predicament of First Nations peoples in BC to an ever-wider audience.” In a research proposal concerning the Nisga’a and Gitxsan, Duff wrote, “They had never signed a treaty, and so still had legal claims to the land…The legal issue is not settled.” 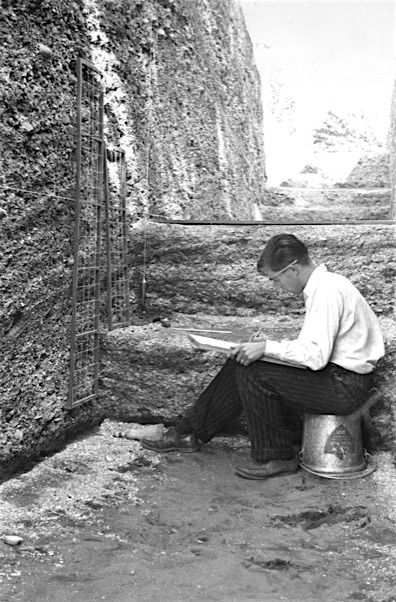 The diligent student: Wilson Duff at a midden site in 1949. Photo courtesy Museum of Anthropology.

As provincial anthropologist, Duff’s reserved personality and listening skills helped when detailing descriptions of daily life and traditions in Indigenous communities. He was keen to acquire knowledge of aboriginal “social organization, shamanism, the acquisition of [spiritual] power, healing with power, and other concepts of the supernatural.” This approach didn’t always sit comfortably with Duff’s theory-focused academic colleagues, but Duff carried on.

Visits at Alert Bay led to privileged Indigenous associations with the Dan Cranmer family, including scholar- daughter Gloria, and with artist Willie Seaweed and revered pole-carver Mungo Martin. Their tutelage helped Duff produce ground-breaking research in Kwakiutl history and culture that challenged established views. In Victoria, Duff sponsored Martin in building a traditional Kwakiutl house that opened with a three-day potlatch — “the first to be held after the clause banning the ritual was dropped from the Indian Act,” writes Fisher, who asserts later that Duff and Martin “were partners who kept the thread of Northwest Coast art alive when it was very tenuous.”

A retired academic, Fisher provides dense coverage of Duff’s workaholic years at UBC. Although Duff never earned a PhD, he was a magnetic classroom instructor, and at Tom Berger’s recommendation testified as an expert witness in pioneering BC Aboriginal Land Title cases such as the Calder Case and the ensuing Nisga’a land claims. 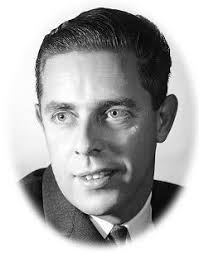 Importantly, Duff argued for the conservation of old, decaying totem poles from remote coastal sites (for heritage research). With Indigenous elders and artists, notably Bill Reid, and with fellow scholars, he surveyed Haida territory especially. Traditionally, fallen poles decayed and returned to earth, to be replaced by newly carved poles in turn. That replacement no longer happened in Duff’s time. Fisher recounts how many, Bill Reid included, believed the Haida pole-carving art form was already dead. Tirelessly, Duff consulted First Nations councils in tracking family pole ownerships, asking permissions, and in offering compensation for removal and preservation of selected poles. Duff did things right for that time: Provincial Museum and UBC Museum of Anthropology collections attest we are the richer for his toil.

Later, with some residual guilt Duff conserved further Haida totem poles from Ninstints on Anthony Island. They could now be popularly accessed, a fact acknowledged by Bill Reid, Robert Davidson, Roy Henry Vickers and others who understood the significance of studying these globally important monuments up close. 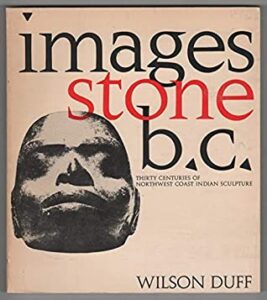 We learn that emotionally constricted and insecure with acclaim, despite his achievements, Duff suffered from depression. While their teenagers looked on, he and his wife Marion drifted apart. As the Sixties moved on, Duff moved out. Social behaviours shifted and Duff had affairs that included students. An insightful poet, he read works from the Human Potential Movement of the period that often paralleled with explorations into psychedelics. Duff’s interpretive interest in the consciousness, which he believed underpinned much of the work by Northwest Coast artists that he admired—the Edenshaws of Haida territory foremost—increased exponentially.

Fisher writes with impressive clarity on the two powerhouse exhibitions of Northwest Coast Indigenous art that cemented Duff’s pre-eminence in evaluating how we now regard this work as fine art, not simply as cultural “artefacts.” Exhibition catalogues such as images stone b.c. for the show at the Provincial Museum (1975), and Arts of the Raven at the Vancouver Art Gallery (1967) were praised internationally. Wilson collaborated with Hilary Stewart and Richard Simmins on the former, and Bill Reid and Bill Holm on ‘Raven.’

But as his personal anxieties increased, and his idiosyncratic concepts of reincarnation and sexuality in Indigenous art became entangled, Duff’s writing powers began failing. Academic views of his ideas dimmed; former students forged careers around him. 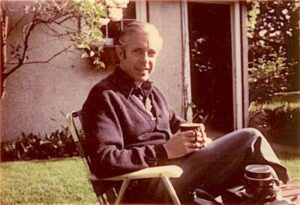 Wilson Duff, around 1975 when he struggled with depression. Photo courtesy Sheila McTaggert.

Fisher sensitively handles Duff’s suicide in 1976. This edition consolidates knowledge of a complex figure central to our evolving understanding of Northwest Coast Indigenous art, and Fisher concludes appropriately in quoting Duff’s long-time friend, Roy Henry Vickers: “You know, you will figure out a lot about Wilson, but you will not figure it all out.” 9781550179750

The mystical extent to which Wilson Duff devoted himself to his work is legendary among those who knew him.

After his preparation of the 191-page Arts of the Raven catalogue for the Vancouver Art Gallery exhibit in 1967, Duff became obsessed with the notion of bringing together the only two stone masks known to exist from the Northwest Coast; one Tsimshian mask with closed eyes was kept in Ottawa and the other with open eyes was kept in Paris. 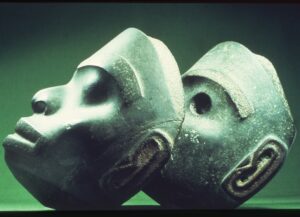 The only two stone masks known to exist from the Northwest Coast. The masks were exhibited together for the first time in a hundred years at the Vancouver Art Gallery in 1967. Photo courtesy SFU.

In 1975, Duff and art gallery director Richard Simmins succeeded in obtaining permission from France to transport their priceless mask to British Columbia. Duff retrieved the twin mask from the Musée de l’Homme for a one-year period, bringing it to his home in Vancouver; Hilary Stewart transported the mask from Vancouver to the Victoria Art Gallery where it was reunited with the mask from Ottawa. “The sightless mask was lifted carefully and placed over the face of its seeing twin,” Stewart recalled. “…the two nested together in a close, snug fit. It was a deeply moving moment as the two masks came together again for the first time in a hundred years or more.”

The mask from Ottawa had been collected by I.W. Powell at the Tsimshian village of Kitkatla in 1879; the ‘open-eye’ mask was donated to the French Museum of Man by Alphone Pinart, said to have been collected at Metlakatla or on the Nass River. After consulting with Musqueam Della Kew, Duff ensured the twin stone masks were henceforth stored together, one cradled by the other, each an equal part of a whole. He later wrote, “Life is a pair of twin stone masks which are the very same but have opposite eyes.” The masks represented the “living paradoxes in myth and life” that Duff believed were near the source of Northwest Coast Aboriginal art. – Excerpt from www.ABCBookWorld.com author entry for Wilson Duff. 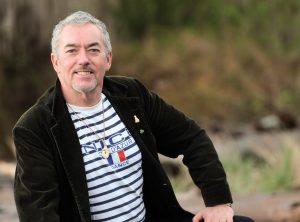 Reviewer Trevor Carolan began writing at the age of 17, filing dispatches from San Francisco’s Haight-Ashbury. He’s published poetry, non-fiction and fiction. He recently retired from teaching at the University of the Fraser Valley.

One Response to “The father of BC Anthropology”