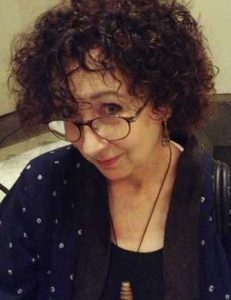 Vancouver-based independent writer and critic, Robin Laurence (at right)  won this year’s Royal Canadian Academy of Arts medal, given to individuals who have made a significant contribution to the cultural life in Canada. Joseph-­Richard Veilleux, RCA President wrote to Laurence that, “You have been one of Vancouver’s most active and integral arts writers and cultural contributors for over twenty years. Your achievements as an award-winning visual arts critic for The Georgia Straight and as a contributing editor of both Canadian Art and Border Crossings magazines, have provided an insightful and intelligent context for the arts in the BC region, and Canada as a whole. Your ongoing dedication to the visual arts in Canada through numerous publications, reviews, essays, and curatorial work, has informed and supported the cultural community of arts in this nation.” Robin Laurence’s published titles include: The Spirit of Haida Gwaii: Bill Reid’s Masterpiece (Douglas & McIntyre, 1997; 2006); and A Sense of Place: Art at Vancouver International Airport (Figure 1 Publishing, 2015). 9781927958261