The constable and the train robber 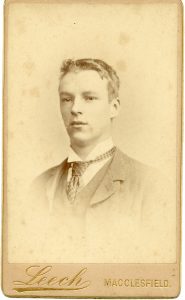 Having left England as a young man in 1888, William Fernie became a police constable in Kamloops.

“Even though Bill was modest and did not push himself forward or seek the centre of attention,” writes Hatch, “his superiors recognized him as someone with intelligence, skills, and perseverance.”

Too often, it is the bad guy who gets all the print. Perseverance: The Life of William Fernie, the Man Who Caught Billy Miner, by Kamloops historian Ron Hatch (not the Vancouver book publisher of the same name), attempts to correct that pattern. Here, in 206 pages, is a biography of William Fernie, best known as the law officer credited with the capture of Bill Miner, B.C.’s infamous train robber, in 1906. 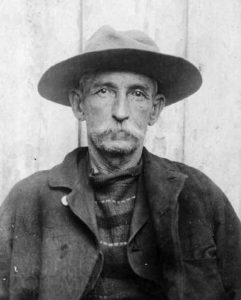 Bank robber Bill Miner, shortly after he was captured in Kamloops, 1906.

Although Fernie made the headlines, he deserved more ink than he received that year. Indeed, the capture of outlaw Miner, also known as George Edwards, was a minor episode in Fernie’s life. Fernie encountered Miner’s gang on a road near Douglas Lake south of Kamloops, but he did not actually arrest them. That was the work of a North-West Mounted Police Patrol. But Fernie has been connected with the event ever since. So, it is not surprising that Hatch cannot resist introducing Bill Miner on the opening page and devoting a later chapter on tracking Billy Miner and his gang, as well as two appendices on the bandit.

The rest of Fernie’s adventurous life, and the bulk of the book, traces Fernie’s journey from England to Canada in 1888, first to Manitoba where he farmed for two years, then “west to British Columbia, where he was a lumberjack, fisherman, cowboy and rancher. Finally, he arrived in Kamloops where he settled for over forty years” (p.19).

Macclesfield, England, was Fernie’s birthplace in 1868, where he was born into an upper middle-class family. He was destined to go to medical school in the footsteps of his father, but for some unknown reason, maybe sheer adventure, took off for North America at the age of 19. After spending two years in Minnedosa, Manitoba, he arrived in Vancouver in 1890, then travelled to the Interior where he worked as a cowboy. He finally ended up in Kamloops in the early 1890s.  He joined Lord Strathcona’s Horse in 1900, “a mounted regiment of Western Canadian cowboys, frontiersmen, and members of the North-West Mounted Police,” (p.33) which was sent to the Boer War in South Africa. Their motto, Perseverance, lent itself to the title of this book. Fernie returned in 1901 and shortly after was appointed a B.C. Police constable. He also joined the Rocky Mountain Rangers, a local militia unit which led to his service overseas in World War I.

His long career as a police constable took him all over the countryside on rural patrols. They were adventurous times but nothing compared to the events between 1906 and 1912.  After Bill Miner’s arrest there was another train robbery near Kamloops involving the Haney brothers, Dave and Bill; and in 1912, the pursuit of Moses Paul and Paul Spintlum with Secwepemc trackers who followed these murderers across the Interior Plateau.

According to Hatch, it was not Bill Miner and the other outlaws but rather the Wobblies (the International Workers of the World) during construction of the Canadian Northern line (now CN) who were Fernie’s greatest challenge. Controlling the strikes revealed Fernie’s tenacity and leadership.  “In 1912 Chief Constable Fernie, twenty armed constables and dozens of special officers were sent to Savona west of Kamloops to protect First Nations workers hired as strike-breakers. They confronted 150 IWW members intent on preventing the scabs from going to work” (p. 78). No violence resulted. 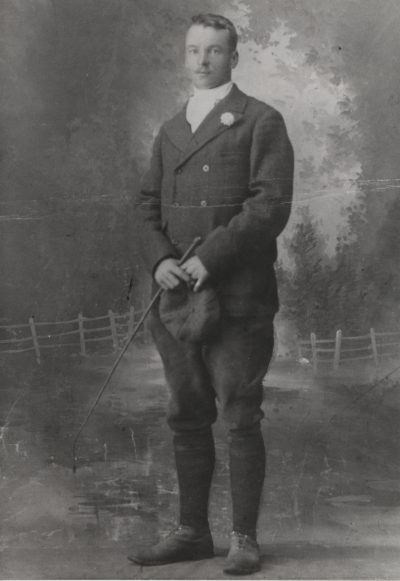 William Fernie was an active polo player in Kamloops and raised polo ponies.

Obviously, Fernie needed an outlet for the stress of his daily job and sports filled the bill. Hatch devotes an entire chapter to the sport of polo in Kamloops in which Fernie was involved. He was among the early members of the Kamloops Polo Club, becoming vice-president and then president of the club in 1931. “He was actively involved in breeding and raising polo ponies.”

Fernie married Mary Isabel Lyle in 1905 and upon receipt of his reward money for the capture of Miner, they built their first house on an acreage they called the Kloff (South African word for “gorge”), just west of the Chinese Cemetery on what became Fernie Road. The house no longer exists.

Fernie retired from the 5th B.C. Horse in 1932 and the B.C. Provincial Police in 1934. His retirement years were spent at home, except for one last trip alone across the Pacific to Australia in 1935. After a prolonged illness, Fernie passed away in 1943 and is buried in the Pleasant Cemetery in Kamloops.

Ron Hatch has situated Fernie’s biography in a global context with chapters on the Boer War, other pursuits of robbers, the history of polo in Kamloops, Kamloops’ involvement in the First World War, followed by more personal history of Fernie’s family, and his other pursuits as a conservationist, artist and poet.

It seems Hatch admires his subject. In chapter nine, “Renaissance Man,” Hatch focuses on the qualities of the man. “Fernie … possessed the qualities of a Renaissance man thought to include curiosity, risk-taking, perseverance and self-discipline, and a thirst for knowledge and new experiences.

“Even though Bill was modest and did not push himself forward or seek the centre of attention, his superiors recognized him as someone with intelligence, skills, and perseverance. He received promotions to the top ranks in both the police force and the militia. Bill’s abilities and character were also acknowledged in the Kamloops community as he assumed leadership roles in his church and the various organizations in which he and his family took part” (p. 129).

Fernie learned the Chinook trade language as well as some Secwepemctsin to converse with the indigenous trackers, he was interested in conservation and horses and sports, and he dabbled in writing and sketching. A few of his poems and sketches are reproduced in the book. 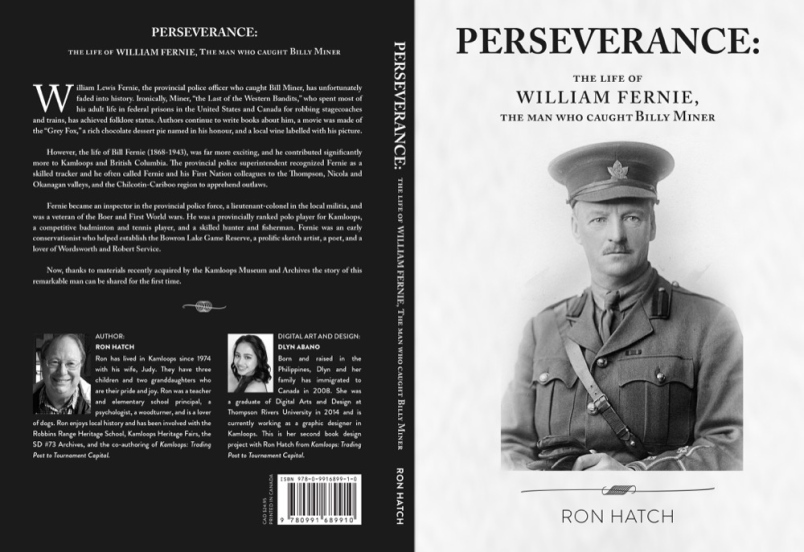 Hatch has written a biography that attempts to paint a larger picture than necessary, self-admittedly sometimes going down rabbit holes.  The six appendices provide more detail on various topics although much could have been incorporated in the relevant book chapters. Topics include Fernie’s Ancestry, Heritage Buildings in Macclesfield, Rural Patrols and Pioneer Settlers, two appendices on Bill Miner, and more on the history of polo.

The book is full of archival photos and illustrations that breathe life into the text. The Fernie Family Fonds in the Kamloops Museum are the source of many never before published photos and drawings. There are also unpublished interviews by the late Peter Grauer, another local historian, who wrote a thorough book on Bill Miner, Interred in Their Bones: Bill Miner in Canada (1903-1907).

New maps and graphics throughout the book were produced by graphic designer Dlyn Abano and, for the most part, are well-executed. The map of “Rural Patrol Pioneer Settlers” is useful in identifying where people mentioned in Fernie’s life resided.

Some material, though, such as a map of rural schools in the Kamloops district, is extraneous.  Other maps are repetitive. The maps showing the route in pursuit of Bill Miner and also the Chilcotin area where Spintlum and Paul escaped are larger than needed and somewhat unsatisfying.

The book is well-written with excellent attention to references, even though there are some inconsistencies and there is no index. However, the time and effort, indeed “perseverance,” in undertaking this work has set a high bar for future local histories. 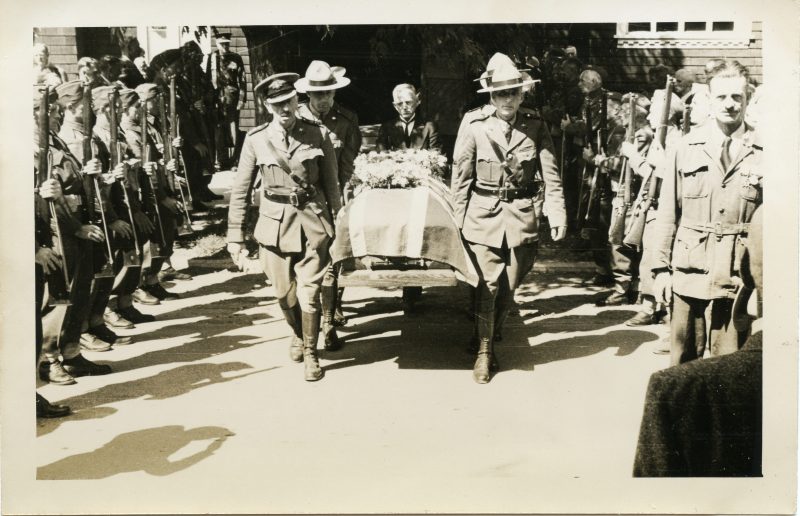 Hatch has made an important contribution to the historiography of Kamloops. His book is well-researched with copious information. What the biography lacks in focus is made up in the detail many readers desire. Local history buffs will recognize names and places mentioned throughout the story. Although essentially a parochial story, this book’s attempt to put Fernie’s life in front of a broad canvas and audience is an ambitious feat. 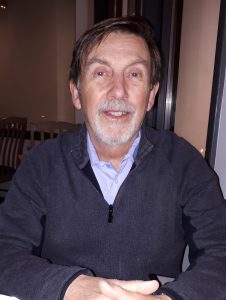 Kenneth Favrholdt, an historical geographer and museologist, has written scores of articles on Kamloops history, as well as book reviews for BC Studies, and most recently a review on the Indigenous Peoples Atlas of Canada for the Canadian Cartographic Association and an article on Land Acknowledgement Statements for the Canadian Museums Association.