The bicycle thief gets his due

Although he never completed elementary school, Glenn Ryder was a maven of B.C. wildlife. 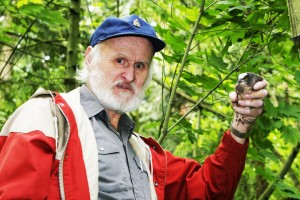 According to B.C.'s leading bird expert R. Wayne Campbell, artist and birdwatcher Glenn Ryder (above) was "the most committed and experienced naturalist the province has known.”

Not so great at school, Glenn Ryder would arrive late each day to, ahem, borrow a bicycle. He needed transportation to go exploring the natural world. He would always return the bike before the school bell at the end of the day.  He was caught only once.

The unsanctioned borrowing of bicycles went on for years. In fact, Ryder’s fascination with flora and fauna—and especially birds—lasted for a lifetime, as outlined in An Old-School Naturalist – Glenn Roderick Ryder (1938-2013), published by the Biodiversity Centre for Wildlife Studies ($25). Over 70 years, Glenn Ryder amassed an amazing 44 linear feet of field notes on the natural and human history of the province. The province’s leading bird expert, R. Wayne Campbell, says Ryder’s lifelong passion for documentation of wildlife is “unparalleled for any naturalist (or biologist) in Canada and probably elsewhere…. In my opinion he was the most committed and experienced naturalist the province has known.”

The unprecedented vigilance of Glenn Ryder as an observer and recorder of animals and their environment in B.C. arose from extreme poverty. He and his brother were taken away from their parents after his father could not overcome the trauma of serving overseas in World War I.

As outlined in An Old-School Naturalist, Ryder spent his formative years in orphanages and foster homes and never completed primary school. But before he was three years old, Ryder was identifying birds seen along the waterfront in White Rock by comparing them with coloured pictures in books.

By five he had an innate passion for recording his encounters with wildlife but had not yet learned to write. His brother, and foster parents, recorded his field observations each day until Ryder learned to read and write.  In particular, his brother, who was five years older, helped him identify birds.

Ryder was frequently distracted by animals he saw on his 5-mile trek to school and was lured to follow them. He was, however, street smart and learned how to avoid the classroom and instead spent time exploring the forests, fields and marshes. The only time Ryder regularly attended classes was when he discovered a pair of American Kestrels nesting in the wall of the school house. He had to know the outcome. When he was sixteen, Ryder and his brother Donald camped and explored Sumas Mountain, a new territory for them. Ryder was so impressed with the diversity of plant and animal life that he decided to make it his personal amphitheater for the next 59 years.

What made Ryder so unusual was his intense and committed attention to nature. Most naturalists would look at a bird such as the Northern Flicker at its nest and merely record its presence. What differentiated Ryder is that he took the time to sex the bird, check the contents of the nest, count the eggs or young, age the nestlings, watch the bird’s behaviour, and identify the tree and measure its diameter. It was this quality of value-added information that set Ryder apart and established him as one of the province’s great naturalists.

Ryder’s pursuits made him into an active conservationist. He and his brother Donald saw their first pair of Western Screech-Owls near Penticton in 1942 when he was four years old. When he moved to Surrey in 1954 to re-unite with his biological family, his interest in owls escalated. On his first outing to explore the woodlands that were still abundant near his parent’s house, he found a roosting family of Western Screech-Owls and over the next several months contemplated their future.

Ryder could see that most of the forests in the vicinity were second-growth and did not provide many of the natural nest cavities the owls needed for nesting. So he started a personal project, dubbed “Operation Owl,” to construct and place nest boxes throughout protected and natural woodlands in the Lower Mainland.

For nearly six decades, Ryder continued with this project and it is considered one of the primary reasons that small populations of Western Screech-Owls still exist in wooded regions of the Fraser River Valley.

Ryder may not have written in academic journals but he was recognized by those in the know. He was one of 28 ‘observer-naturalists’ highlighted in the definitive four-volume set The Birds of British Columbia published by UBC Press.

The Langley Field Naturalists and the Abbotsford-Mission Nature Club both gave Ryder honorary life memberships. In 2012, he received the Steve Cannings Award for contributions to ornithology from the B.C. Field Ornithologists.

Glenn Ryder—the bicycle thief—left behind a wealth of observational records and a legacy of conservation. Even though he wasn’t as eloquent and educated as great naturalists like Aldo Leopold, John Muir, and Henry David Thoreau, R. Wayne Campbell argues persuasively his contributions were equally invaluable.

“He was one of B.C.’s most remarkable naturalists,” says Campbell. “He provided over seventy years of detailed baseline information that today can be used in interpreting the effects of climate change in the province as well as establishing conservation priorities, species population trends, and identifying critical habitats that require protection.”

Glenn Ryder died on October 2, 2013. An Old-School Naturalist – Glenn Roderick Ryder (1938-2013) is available for $25 (includes postage) from the Biodiversity Centre for Wildlife Studies (www.wildlifebc.org) via Pay Pal or cheque.

The publication was overseen by R. Wayne Campbell who has authored ore than 600 peer-reviewed and popular articles (mainly on birds) that includes some 35 books published by the Royal BC Museum, Lone Pine, UBC Press, Harbour Publishing, Discovery Press, Vancouver Natural History Society, Canadian Wildlife Service, BC Ministry of Environment and BC Ministry of Forests. He was the lead author on the four-volume set The Birds of British Columbia (UBC Press, 1990, 1997, 2001) to which Glenn Ryder was a major volunteer contributor.