The adventures of Tony Vicar 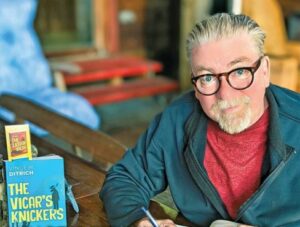 Vince R. Ditrich’s first novel, The Liquor Vicar (Dundurn, 2021) introduced failed musician Tony Vicar who is suddenly rocketed to fame in the small town, Tyee Lagoon (said to be based on Nanoose Bay). But fame brought unwanted attention and dangers to Tony’s life and his love relationship. In the sequel, The Vicar’s Knickers (Dundurn $19.99) Tony Vicar is still famous. He still lives in Tyee Lagoon. His girlfriend Jacquie O is still with him. Only now, Tony has turned his attention to renovating an old hotel and converting the shabby beer parlour into a lavish pub he plans to name the Vicar’s Knickers. There are unforeseen challenges, like the gossip columnist, Richard X. Dick intent on undermining Vicars. And then a surprise is left on Vicar’s doorstep one night. Without spoiling the ending, publicity states that Tony “must tackle the greatest misadventure of his life: parenthood.” Ditrich is the semi-retired drummer and manager of the band Spirit of the West. He lives on Vancouver Island. 9781459747289