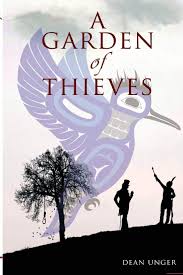 Precious few British Columbians can tell you the name of our first provincial Premier—John Foster McCreight, a lawyer—but possibly one in a thousand can tell you our second Premier was Amor de Cosmos.

Born as William Alexander Smith in Nova Scotia in 1825, he was working as a photographer in California when he officially changed his named to Amor de Cosmos (“Lover of the Universe”). He came north to Victoria where he founded the British Colonist newspaper and became a thorn in the side of Governor James Douglas in the early 1860s. 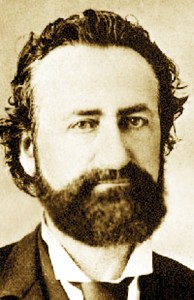 While advocating union with the rest of Canada, de Cosmos was a notorious bigot but not a dyed-in-the-wool British chauvinist. “I would not object to a little revolution now and again in British Columbia, after Confederation, if we were treated unfairly,” he said in 1870, “for I am one of those who believe that political hatreds attest the vitality of a State.”

Following Confederation in 1972, de Cosmos served fourteen undistinguished months as Premier in 1872-1873, spending much of his time in London and Ottawa. Later as a federal MP, he introduced a resolution calling for B.C. to secede, eventually losing his seat in 1872. His eccentric and intemperate character led a court to declare Amor de Cosmos was incapable of managing his own affairs in 1895, whereupon his brother became his legal guardian. He died two years later.

The Times-Colonist newspaper is his best-known legacy. De Cosmos founded and edited the British Colonist (1858–60) and it continued as the Daily British Colonist, 1860–63) and he founded the Victoria Daily Standard (1870–73). Journalist Roland Wild and anarchist George Woodcock have written short biographies in 1958 and 1975 respectively.

Dean Unger has self-published Garden of Thieves (Village Lane Press $17.99) and Blessed Be The Bones (Village Lane Press $17.99) to tell a murder mystery tale inspired by events on Texada Island and in Victoria between 1861 and 1872. He says it has taken him twenty-five years to uncover the details of a land grab that was partially orchestrated by Amor de Cosmos—the subject for the province’s first Royal Commission. 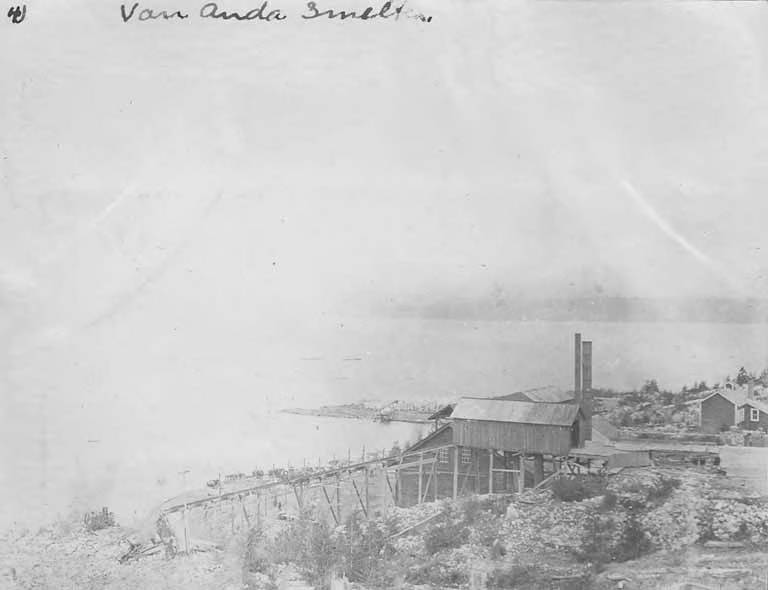 The province’s first public inquiry investigated how $276.68 had somehow gone missing from a Nanaimo bank in 1872. After three days of inquiry, three commissioners ordered a bank manager to repay the lost money—and de Cosmos was cleared of allegations that he had abused the public trust in order to further his efforts to develop an iron mine on Texada Island.

The scandal has been mostly forgotten until Unger’s recent efforts to look into the social and criminal aspects of the case. The story goes that de Cosmos and his partners had wanted ownership of Texada Island in order to sell mineral rights. The Tla’amin people of the Salish Nation were victimized in the process.

“Although the book itself is a work of historical fiction,” says Unger, “the process of writing it has been the culmination of my career, and has helped me sort through my own discomfort at what unfolded in our near past.”

Although de Cosmos could be liberal in many respects, he believed that concessions of land to Indians were over-generous and blocked “legitimate” white settlement. He opposed recognition of Indian title to land—as developed by treaties made by James Douglas—and he argued that “Indians must no longer be treated as “a privileged class.” Instead, “the Indian” must “earn his living the same as a white man.”

Racism is therefore at the heart of the murder mysteries.

In the first fictional tale we meet Canada’s first female journalist, Eve Walker, who discovers the body of a labour leader washed ashore on Texada Island. She visits the man’s Salish wife, Heidi Tsan, who tells her the murder was racially motivated.

In the company town of Vanada on Texada, Walker is aided by a helpful town coroner and some local unionists. The trail leads Walker to uncover Amor de Cosmos’ allies, including Judge Walkem, who was also involved in an alleged land grab scheme involving the Highland Bell Mine near Rock Creek. 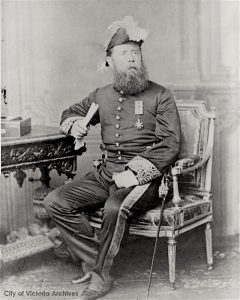 Joseph Trutch as Lieutenant Governor of B.C., circa 1870s.

As well, Unger has highlighted the prejudices of the notorious Joseph Trutch (“an outright bigot”) who delegitimized Douglas’ progressive treaties with First Nations, reducing Douglas’ initial reserves by 92%. In 2007, according to Unger, the history magazine, The Beaver, assembled a list of the “Worst Canadians” and Trutch made the list.

In the follow-up tale, Walker enlists the help of a Salish guide named Big John and an Algonquin tracker named Toumo Hansen to help Heidi Tsan save her brother Eli Tomas, the only son of Chief Israel Tomas, who is held prisoner in the Vananda jail. Ostensibly, Eli has been accused of murdering his sister’s husband, Ernie Tsan, because he resented his sister’s marriage to a white man.

Eli has been tried and convicted in a kangaroo court by Judge Everett Noble, a friend of the ruthless Captain Red Sutherland of the British Columbia Provincial Police. Eve and her two trackers must hurry overland to Lytton, to intercept an entourage of Federal Governors, on tour of the British Columbia interior, to seek their intervention in the trial. 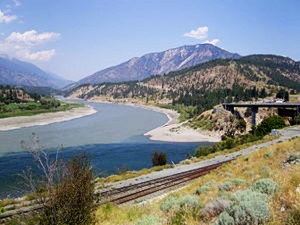 The British Secretary to the State, Edward Bulwer Lytton, becomes involved—as does a faction of young Tla’amin Salish warriors who choose the path of violence to avenge the injustices faced by their people.

Unger has outlined some of the history that gave rise to his pair of historical mysteries novels on his website. Here is a brief excerpt in which he recounts a personal incident that helped motivate him to write:

The long and short of it is, where British Columbia is concerned, that the historical record conclusively damns De Cosmos for his efficacious greed, and self-serving intent, at the expense of First Nations, under his protection. The cost of this approach also came at the expense of the thousands of settlers who’d come here to make an honest living. De Cosmos, with his gregarious yet affronting and often aggressive style, earned himself some powerful enemies in positions of influence. In pouring through court transcripts for the case, and in reading the coverage of D.W. Higgins, the new editor of the British Colonist, now renamed the Times Colonist, the notion crept into my periphery that, perhaps it was not too grand a step to imagine that his exile from the Colonial Government – and popular swimming holes there-of, might have been orchestrated, at least in part. In the end, whatever the case, in later years De Cosmos went mad. Meanwhile, the stage had already been set, and with the newly drafted legislation, they tore through people’s lives, their cultures, and their very existence – in many cases clawing back land that had already been given. 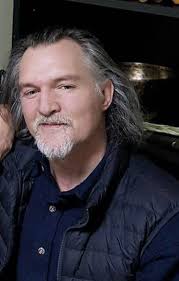 For a long time, it was said that the Coast Salish never lived on Texada. Though the hunting and fishing there was very good, it was said their belief that the island rose one day from the ocean in a great cataclysm dissuaded them from keeping a village site there. It was asserted the Tla’amin believed that, as surely as the island had risen from the sea, one day it would return: to live there would, of course, be foolish. In any case, for the purpose of the story, it seemed germane – logical even – to create a Salish Village on the Island. Though overt reference to the fact was, in my experience, limited, there were whisperings here and there, that it might be true; a silent golden thread to follow. Then, one day, I sat down with the brother of a former Tla’-amin chief – twin brother, actually, and he told me an interesting story. One day, years ago, he and a friend had been dicing up a large windfall at Shelter Point. Inside, smack-dab in the centre of the tree, was a cast iron cannon ball. Short of a few drunk sailors blowing off steam with some target practice, or a mutiny of some kind, there were few reasons, during the age of European “arrival”, to want or need to fire a cannon ball shore-ward. One does not need to let the imagination wander too far, to come to a logical conclusion.

In actual fact, in 2013, Aquilla Archaeology submitted an impact assessment for Shelter Point, to the Powell River Regional District. The extensive report succinctly, and with perfect grace, revealed to council that there was, after all, a Coast Salish Village there on Texada. A big one. It was, the report suggested, potentially one of the largest Georgian Period Salish settlements found here on the lower BC coast. 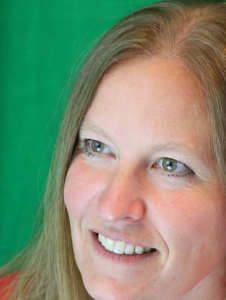 Here, I reserve comment, as I fear I may come off a little reproachful. Instead, I assent to a statement by Jennifer Manuel, who writes in her recent book, The Heaviness of Things That Float – an historical fiction based here in BC, that after coming to terms with a contradiction among stories of arrival (the First Nations perspective) that tangle with the stories of first contact (European perspective), “Stories of contact” is a phrase that sounds as feathery and constructive as God’s touch upon Adam’s fingertip, when in fact these stories have been violent and corrosive. Weeds choking plants of sustenance… I know nothing about contact. I know only about arrival, and the dangers of presuming too much.”

I can easily see that cannon ball there, still and slightly glistening, in the dying sun. And I imagine that, upon its pitted surface was re-written the entire history of Texada Island. After all, there is, in all likelihood, much more to the story than was believed. The prospect of mortality, regardless of intellectual readiness, supposedly, to accept it, shakes one to the core. 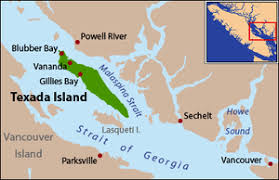