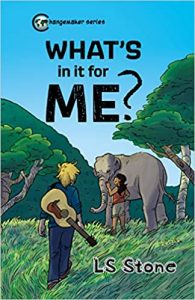 Vancouver Island-based LS Stone’s debut YA novel, What’s in it for Me? (Rebel Mountain $13.95) is about teen friends, Nick and Trevor who couldn’t be more different.

Nick dreams of being a rock star and thinks only of getting a deal for his band, partying all summer and surfing at Tofino. Trevor is set to do volunteer work in Africa building a school. Trevor convinces Nick to think of more than just entertaining himself and to volunteer at an elephant refuge in Thailand.

Trevor himself is set to go to  Kenya, where he will eventually develop an important relationship with a local 12-year-old boy and learn some life lessons.

In the meantime, back in Thailand, Nick becomes entranced with a Thai girl who wants to be a mahout even though local tradition doesn’t allow female mahouts. Nick also encounters an animal rights activist, a drugged tiger and marauding elephants. Will the events change Nick’s self-centered outlook on life? And will the two teens stay friends?

LS Stone won the Bill Juby Award (2016) and Meadowlarks Award (2014) for outstanding writing. Her interests include animal rights and welfare, and social justice. She has a BA in creative writing from Vancouver Island University.
978-1-9992416-8-1