Not everyone is brain-dead in summer 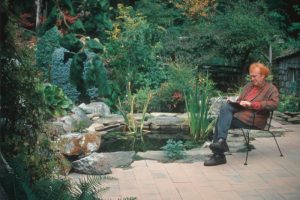 Ardent gardener Des Kennedy of Hornby Island is one of 24 contributors to The Summer Book.

“The Summer Book is my counterweight, a small feather on the scale against the madness and angst in the world,” she says.

Mona Fertig’s new anthology is dedicated to the late Cat Majors, a performance poet who “was always about joy, creativity and positivity.”