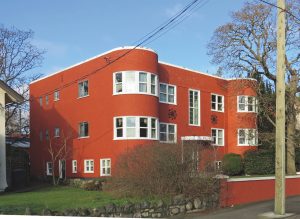 The symetry of this 1941 apartment building demonstrates the Moderne style. Nick Russell photo.

Nick Russell celebrates 147 of the City of Victoria’s most noteworthy residences in Glorious Victorian Homes, reviewed by Larry McCann. This Gothic Revival Wentworth Villa, built in 1863, was restored and is now an architectural heritage museum. Nick Russell photo. Built in 1861, the Dandridge House is an example of Early Vernacular and Homestead. Nick Russell photo.