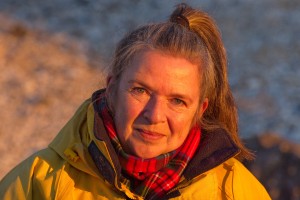 Woodward’s journey started when a stranger described what it was like to work as a relief lightkeeper. That was enough for Woodward. Even though she already had an interesting position, which she describes as “my first literary job with a dental plan”, Woodward left in 2008 to go to remote Lennard Island Lightstation, near Tofino. Woodward’s husband, Jeff George, had already relocated there to be the Assistant Lightkeeper.

Woodward’s goals were to re-connect with the natural world, get away from the confinement of a successful but hectic career and “feel alive” again, and have more time to write.

Did Woodward find her ideal of an exciting new life? Hint: she finds out that lightkeepers often work seven days a week, for months at a stretch. When is there time to write?

The book’s blurb describes Woodward’s memoirs as about, “choosing adventure over security”, indicating at least one of Woodward’s ambitions came true.

Upcoming events for the launch of  Light Years: Memoir of a Modern Lighthouse Keeper:

Excerpt from Light Years: Memoir of a Modern Lighthouse Keeper

It all started with a runaway Jack Russell terrier on the open deck of a B.C. ferry bound for Alert Bay. I’m a dog-lover so I scooped up the grey-muzzled fellow before he came to any harm. I held on to him and scanned the drivers and the foot passengers. Soon enough, an anxious middle-aged man appeared and I knew exactly who he was looking for between the rows of parked cars and trucks.

The fall day was brilliantly sunny and like many ferry passengers on the west coast, the Jack Russell owner and I chose to stand outside on the deck of the boat. I was beside my Chev Tracker, packed to the roofline with plastic tubs and cardboard boxes filled with catalogues and books, as usual, a reliable conversation piece. I explained that I worked as a publishing sales rep. He echoed my admiration for the quality of the exhibits at the U’Mista Cultural Centre and the strong community life shared by the aboriginal and white residents of the historic fishing village. He said he was on his way to a six week stint as a relief lightkeeper on neighbouring Malcolm Island, the next ferry stop after Alert Bay on Cormorant Island.

“Wow!” I said and then went on to say what I’ve now heard from others at least one hundred times over. “I thought all the lighthouses in B.C. were shut down.”

I was patiently educated on the spot with a brief history of the repeated attempts, in the 1980’s and 1990’s, to de-staff the lighthouses, a political debacle vehemently opposed by mariners, aviators and several strong allies, most notably MP, and then Senator, Pat Carney, in government at the federal level. Twenty-seven B.C. lighthouses, as of that September day in 2007, were still staffed by human beings although dozens more were automated before decision-makers called a halt.

I sold hundreds of copies annually of two popular history books published by Harbour from the 1990’s, Lights of the Inside Passage and Keepers of the Light by lightkeeper Donald Graham, to booksellers on the BC coast but I had not made time to do more than a quick skim myself. I made a mental note to correct that situation. My curiosity was really piqued for another reason though.

“Do you have to be an engineer or mechanic to be a lightkeeper?” I asked.

No, explained my new acquaintance, who gave me a capsule history of his own life as a civil servant, rising to become a regional manager in the BC Interior. Then he visited one of his sons who had found work in Port Hardy at the northern tip of Vancouver Island. He felt an immediate excitement and bonding with the wild Pacific Ocean and the lively northern community. ‘This is where I need to be!’ he declared to himself on the spot. It wasn’t the kind of idle dreaming we nearly all indulge in while on scenic holidays. He made the Big Change, leaving the management desk job and all the trappings of a successful, dull life behind, not an easy thing at all. I have always been averse to feeling trapped myself so I listened well.

He assured me that as long as a person was capable of handling radio communications by taking an operator’s course readily available through the Canadian Sail and Power Squadron teaching network and had updated first aid qualifications, one could qualify to be a relief lightkeeper. Being handy with tools and machines were good practical skills to possess but it wasn’t necessary to be a stationary engineer or a heavy-duty mechanic.  He mentioned doing weather reports by radio and that the permanent lightkeepers trained the newcomers, as every station had a different set of visual guides to work with and different instruments to utilize. Doing relief work was a good way to see if the lifestyle appealed on a more permanent basis, he said.

Then I drove off to my book-selling appointments and he and his little companion went off to give the lightkeeper his annual holiday break at Pulteney Point Lightstation on Malcolm Island. I now know that lightkeepers work seven days a week, for months at a stretch, and also that relief keepers are much-needed for medical, dental and family emergencies and for annual holidays.

On the wild and lovely three-hour drive home from Port McNeill to Union Bay the next day, I kept mulling over his practical advice. I remembered how his face lit up when he said how he felt deeply alive upon arriving in Port Hardy.

And wasn’t that exactly how I missed feeling? And wasn’t that even more the case for my husband, who dutifully worked at all kinds of low-paying, part-time jobs with awful hours and no benefits or holidays for years on end? I, at least, had an interesting job with great benefits, my first literary job with a dental plan, as I liked to quip. I could read some of the best new books in the English-speaking world, for free, hundreds and thousands of them every year. But I wasn’t doing what I really wanted to be doing with my life and I knew it. My chronic headaches, back spasms and weight gain reminded me constantly that I was out of whack, missing the sizzle and spark and solitude. I was a writer who was too busy working at peddling thousands of other people’s books annually to manage more than two Saturdays a month on my own work, hidden behind the Foreign Books section in the Courtenay Library.

Writing is not, as I have patiently explained to a close relative, like darning socks, something that you pick up with a happy little sigh of contentment at the end of a long and exhausting day.

I have to say my heart was broken then, in several places, during that busy and frustrating decade-and-a half of trying and apparently failing to write something that somebody out there would take a chance on and publish. So I dutifully kept my shoulder to the family and work wheel, I enjoyed my community life and the real gratification that comes from serving others, and I kept on writing in fits and starts. We’d done our job as parents, raised a fine young man who had graduated from college and found work in his field, and raced sailboats all around the world, and now what?

Maybe it was our turn now, to launch into new adventures, adventures that could give both of us time to write and photograph and paint and grow a massive garden? And kayak and make quilts and learn a couple of musical instruments and make a salmon smoker. Time to think and listen to birds singing and know exactly who the singer was, time to stare through binoculars at whales spouting off in the distance and dolphins twirling amongst them and eagles soaring in wide, slow circles above. Time for new happiness, for new adventures while we were still capable and healthy, if somewhat grey around the muzzles ourselves.

[My husband] Jeff’s fingers flew over his keyboard until he found the federal government jobsite. He applied to be a relief lightkeeper within 24 hours, with my unreserved blessings.

2 Responses to “A modern lighthouse keeper”