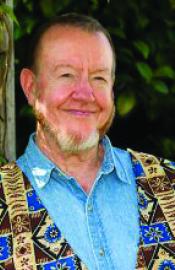 Since retiring from teaching at UBC in 2004, George McWhirter has been almost as busy as ever, publishing a new collection of short stories, The Gift of Women (Exile Editions 2014). Two of the stories, “Tennis” and “Sisters in Spades,” were finalists for the Gloria Vanderbilt Short Story Prize and appeared in the CVC Carter V Cooper Anthology Series. McWhirter read part of another story, “Arrivederci,” at the Vancouver Writers’ Festival in October. He continued to translate Mexican poets including Homero Aridjis, with Tiempo de ángeles / A Time of Angels (Mexico City: Fondo de Cultura Económica / City Lights: San Francisco 2012) and Gabriel Zaid, with Poesía selecta de Gabriel Zaid / The Selected Poetry of Gabriel Zaid (Philadelphia: Paul Dry Books, 2014) with fellow translators Eliot Weinberger, Margaret Randall and Daniel Hoffman, among others. Born in Belfast on September 26, 1939, George McWhirter was raised in Shankill Road district and received his B.A. from Queen’s University in Belfast, where his classmates included poets Seamus Heaney and Seamus Deane, and Robert Dunbar, the Irish children’s writer. He taught at Kilkeel, Bangor, County Down (1962-1965) and at the University of Barcelona’s Escuela de Idiomas (1965-1966). He came to Canada in 1966 and first taught high school in Port Alberni, living in a log cabin by Sproat Lake. He has lived in Vancouver since 1968 and received his M.A. from UBC in 1970. He was head of UBC’s Creative Writing Department from 1983 to 1993.