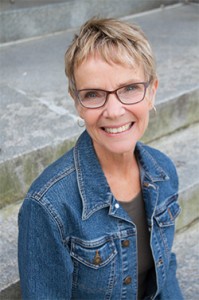 CBC Books, CBC’s online home for literary content, together with its partners the Canada Council for the Arts, Air Canada enRoute magazine and Banff Centre for Arts and Creativity, have announced newly-published author Leslie A. Davidson has won the 2016 CBC Creative Nonfiction Prize.

Stories often percolate in a writer’s head long before they finally appear in published form. Such was the case for Davidson who waited until retirement from teaching and parenting to finally see her first picture book In the Red Canoe (Orca 2016) in print. Illustrated by Laura Bifano, the story celebrates the bond between grandchild and grandfather as well as nature. Lily pads, yellow flowers, crying loons, fish, herons, baby ducks, swooping swallows and more fill the pages of quatermain rhymes.

Now Davidson has also won the CBC Creative Nonfiction Prize for Adaptation, a story selected from more than 1100 works received from across the country. Adaptation reflects the challenges of her home life.

In 2011, Leslie Davidson was diagnosed with Parkinson’s disease. Soon after, her husband was diagnosed with young-onset dementia. “Telling our story,” she says, “began as therapy but became the articulation of a journey, full of sorrow but coloured by astonishing love, humour and compassion.”

The jury was composed of writers Brian Brett, Diane Schoemperlen and Drew Hayden Taylor. According to the jury: “Adaptation is the story of a long-married couple going for a walk along the river near their town. Beyond the strong and simple writing lies all the complexity of love and pain and how we must get used to the hard things we are not used to. Told with tenderness and gentle humour, it is the story of searching for signposts to help us navigate the new terrain of our lives as we age.”

When Leslie A. Davidson retired from teaching, she started submitting her stories, collecting “rejections and advice, discipline and humility for my wannabe writer-self.” Now In The Red Canoe is widely available and her story Adaptation can be read on-line at CBCBooks.ca. Davidson also receives $6000 from the Canada Council and her story will be published in Air Canada’s enRoute magazine, plus she is the recipient of a ten-day writing residency at Banff Centre for Arts and Creativity.

Leslie Davidson and her husband live in Revelstoke. She previously lived in Kingston, Ontario and Grand Forks, B.C.