Horses and healing are a good fit in Luanne Armstrong’s Sand, a YA novel about a therapeutic riding centre. 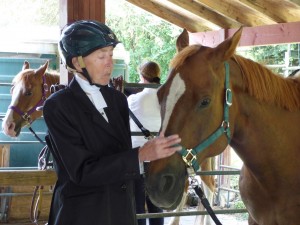 Paralympic hero Karen Brain’s recovery in Creston was an inspiration.

Book launches in small towns often draw more people than similar events in Vancouver and Victoria. A September gathering at Archibald House in Creston to celebrate the release of Luanne Armstrong’s new YA novel Sand (Ronsdale $11.95) was a case in point. Proceeds from all sales were donated to District Therapeutic Riding Centre (849 Erickson Road), a local facility that features prominently in the plot of the book. Here Chris Brauer’s adapted and augmented article from the Creston Valley Advance is reprinted by permission.

Sitting at the Formica table, Luanne Armstrong is buzzing with excitement. She has recently read and re-read Seamus Heaney’s poem “North” that reflects the ancient and modern faces of Ireland.

Armstrong eagerly discusses the mechanics of poetry, her involvements with the UBC Creative Writing department and a book she has just bought about sailing—even though she doesn’t sail—before she gets around to her own new book, a teen novel.

“It’s a story about Willy,” she says, “a teenager reacting to trauma and eventually finding a place in the world where she feels she belongs.” In Sand we are introduced to fifteen-year-old Willy Cameron who is paralyzed from the waist down after a car accident. Demoralized, she takes up therapeutic horse riding and regains the use of her legs, developing a bond with a spirited rescue horse named Sand. Trouble arises when she takes Sand from the stable, against the order of the stable owner, to search for a missing friend.

Named after the horse that helps Willy, Sand is dedicated to the Creston and District Therapeutic Riding Centre.  All horses in the book are based on real horses at the Centre. Therapeutic riding is something close to Armstrong’s heart.

“I remember when Karen Brain came to Creston,” she says. “She was a member of the Canadian Equestrian Team, but she had a severe accident and her spine was crushed.  She was told she would never walk again—and certainly not ride—but she demanded to be put on a horse two months after her accident.

Karen Brain came to Creston to teach riding workshops. She is one of numerous examples of individuals who have regained the ability to walk while using horses as therapy. Armstrong herself also has an understanding of trauma and the recovery process, having herself overcome brain surgery. Writing about teenagers for teenagers, says Armstrong, has allowed her to get back to the habit of writing:  “Writing Young Adult books is not difficult for me. In a way, it’s a form of entertainment. I sit down to write in the afternoon and it carries me away for the rest of the day.  I wonder, what will happen today? Where will the story go?  I try to write a great story with action and interesting characters.  My brain gets to run wild. I didn’t know the ending of the book while I am writing it. Sometimes the characters lie to me and then the truth comes out later.  I allowed the characters to unravel the story for me.”

Armstrong was interested in exploring how teenagers react to dealing with various trauma. Specifically three teenagers in the book—Willy and her two friends—are all dealing with hard emotional truths: paralysis, psychosis and bullying. “It’s a sweet, positive book,” she says, “but it’s also about ferocious anger and the emotions of teenagers,” says Armstrong.

“Willy has to deal with paralysis; Ben has a psychotic break from taking drugs; and Lailla is bullied.  But they recognize each other for who they are, and help define each other.”

Sand is part of Armstrong’s on recovery from a brain injury. Now she has finished the book, she regained the rhythm of constantly writing.  “I used to write everyday,” she says, “I’d get dressed as if I was working a regular job and cross my living room and write at 9 a.m. But my brain injury forced me out of the habit.  It’s harder during the summer with so many visitors at the farm. I’m harvesting fruit and chasing away bears. But now I’m working on four different projects. Still the process of writing is no picnic. “Every book is a book I haven’t written yet,” she says.  “so it takes a lot of thinking and walking around before I figure things out.” As of 2016, Luanne Armstrong had published twenty books in a variety of genres. She won the 2014 BC Chocolate Lily Award for I’ll Be Home Soon (2012) and other titles have received other nominations. Among them, her book of essays, The Light Through the Trees: Reflections on Land and Farming (2012) was a finalist for The Hubert Evans Non-Fiction Prize.

Kootenay-born-and-raised, Luanne Armstrong is an organic farmer on a fourth-generation family farm in the small community of Boswell, B.C. With her MFA degree from UBC, she has increasingly taught writing (as an adjunct UBC professor of Creative Writing, at the College of the Rockies in Cranbrook, and for evening courses at Langara College). Along the way Armstrong has worked as a feminist researcher, a freelance journalist, publisher and editor for Blue Lake Books and HodgePog Books.