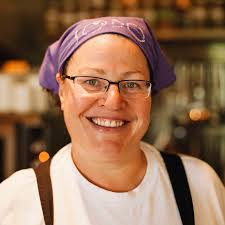 Lisa Ahier’s The SoBo Cookbook: Recipes from the Tofino Restaurant at the End of the Canadian Road (Random House $29.95), with Andrew Morrison, was an unexpected bestseller upon release and has gone into its third printing in less than a year.

Artie and Lisa Ahier started Tofino’s SoBo (Sophisticated Bohemian) restaurant in 2003 from a converted purple food truck in a parking lot when food trucks were still a relatively new concept on the West Coast. The staff’s t-shirts boasted the food was the second best experience you could ever have in a parking lot. Much of the clientele consisted of locals and young surfers. The quality of the food grew the business until they took over new premises in Tofino.

Given that Tofino is situated at the end of the Trans-Canada Highway, the number of tourists who visit scenic Long Beach and cozy Tofino–with its marvelous cash-only hippie bakery and whale watching excursions–is high, resulting in an array of excellent dining choices in such a small town that also boasts a fine bookstore, Mermaid Tales, and numerous art galleries. SoBo smartly reflects the area’s penchant for originality combined with relative informality. There are no reservations taken in the peak summer months. Ahier and her co-manager husband Artie had a cookbook in mind for years but insisted upon undertaking the design themselves, in keeping with their own rigorous standards and do-it-yourself work ethic. Hot dishes had to be photographed hot; cold dishes had to be photographed cold. The slow germination process for their book–distributed by Random House, but mostly controlled and produced by SoBo–mirrors the approach taken by their unique restaurant.

With photos by Jeremy Koreski and a foreword by Sarah McLachlan, the book has been nominated for a B.C. Book Prize in 2015, a rarity for a cookbook, and it has now received a 2015 Gourmand Award for best book by a female chef in Canada.