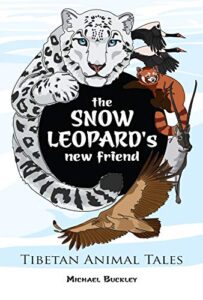 B.C. author, Michael Buckley’s The Snow Leopard’s New Friend: Eco-Tales from Tibet (Sumeru US$34.95) for children aged 8 years and older, is an introduction to the unique wildlife of Tibet and how these animals have found ingenious ways to survive in such extreme high-altitude terrains—from the highly elusive Snow Leopard to the majestic Black-necked Crane. Book illustrations are by Tenzin Choekyi and Rohan Chakravarty.

Featured are ten tales about Tibetan animals, with another dozen cameos about other species. These tales convey an eco-message about the need to live in harmony with nature; not fight against nature.

This title is actually three books rolled into one: the main section comprises the ten animal tales, while part two features detailed profiles of the real animals, and part three is a resource section for following up with discussion questions and more. Along the way, readers will be drawn into the mesmerizing landscapes of the Tibetan plateau—and drawn into the stark problems these lands face, from climate chaos to mining, deforestation and damming. This book has also been translated into the Tibetan language and distributed to Tibetan schools across the Himalayan range.

Michael Buckley is a Canadian author, photographer and filmmaker who specializes in Tibet, the Himalayas and Southeast Asia. He has authored a dozen books about these areas. He has also researched Tibet for the last 35 years. He authored Meltdown in Tibet (Palgrave/Macmillan & Raincoast, 2014), an expose of China’s reckless destruction of ecosystems from Tibet to Asia. His most recent book is This Fragile Planet: His Holiness the Dalai Lama on Environment (Sumeru Books, 2021), which he edited. 9781896559773