Six finalists in the running for Ryga

Presented annually to a B.C. author for an outstanding book about social issues, the George Ryga Award for Social Awareness is a $2500 literary prize to be presented at the Vancouver Public Library on June 29. 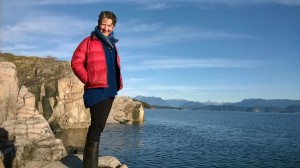 Carrie Saxifrage is one of six authors shortlisted for this year's Ryga Award.

This year’s shortlisted nominees have been announced.

David Boyd for The Optimistic Environmentalist: Progressing Toward a Greener Future (ECW $19.95)

Chris and Josh Hergesheimer for The Flour Peddler (Caitlin $24.95)

David Suzuki for Letters to My Grandchildren (Greystone $27.95)

The judges for this year’s competition were:

The Ryga Award will be presented in conjunction with the George Woodcock Lifetime Achievement Award. Supported by Yosef Wosk and Vancouver Public Library, the Ryga Award is administered by Pacific BookWorld News Society. The award is an annual literary prize initiated by Alan Twigg of BC BookWorld and John Lent of Okanagan College in association with The George Ryga Society. In 2003, Vancouver writer Maggie de Vries won the first Ryga Award for her memoir Missing Sarah (Penguin Canada) about her sister who went missing on the Downtown Eastside. In 2004, The Greenpeace to Amchitka: An Environmental Odyssey (Arsenal Pulp Press) by the late Robert Hunter was selected and the award was presented to Robert Hunter’s widow during a Greenpeace crew reunion. In 2005, the winning book was In Plain Sight: Reflections On Life In Downtown Eastside Vancouver (Talonbooks), edited by Leslie Robertson and Dara Culhane.

Information about all other subsequent winning titles is available here:

George Ryga is British Columbia’s greatest playwright. Only Eric Nicol, who had the first production of an original play by a B.C. writer at the Vancouver Playhouse, could begin to lay equal claim to the title of Father of B.C. Playwriting in the modern era.

The turning point for Ryga–and for Canadian drama–was his lyric documentary play about a young First Nations woman named Rita Joe who comes to the city only to die on Skid Row. Commissioned as a work for Canada’s Centennial celebrations, The Ecstasy of Rita Joe is easily one of the most moving plays that Canada has ever produced. The play first starred Frances Hyland as Rita Joe; Chief Dan George as her father; Ann Mortifee as the singer; Robert Clothier as the priest; and August Schellenberg as Jaimie Paul. It was directed by George Bloomfield. It premiered on November 23, 1967 at the Vancouver Playhouse. Ultimately the integrity of its central character demands self-destruction, a reflection perhaps of Ryga’s early Catholic upbringing that he rejected in favour of socialist politics. In a perverted way, notes critic R.B. Parker, “her [Rita Joe’s] rape and death are the ecstasy of a martyr.”

The Ecstasy of Rita Joe was also the first play in English to be presented in the National Arts Centre Theatre in Ottawa in 1969. For several years afterwards it shook the nation. Less acclaimed nowadays, its follow-up at the Vancouver Playhouse, Grass & Wild Strawberries, was a greater commercial success in B.C. with original music from The Collectors (who later became Chilliwack). In keeping with the communalism of the Ryga household in Summerland, where artists were continuously welcome, Grass & Wild Strawberries was a genuine ‘happening’ that boldly embraced the zeitgeist of Vancouver’s volatile street scene and B.C.’s back-to-the-land hippie movement. Spurred by these two remarkable hits, the Vancouver Playhouse then commissioned Ryga for another play slated for presentation in February of 1971. Ryga’s political drama Captives of a Faceless Drummer closely paralleled the events of the October Crisis in 1970, dramatizing conflicting ideologies. The Playhouse board of directors reversed a decision to produce the play. This led to the outright dismissal of artistic director David Gardner and to the reputation of Ryga as being ‘too radical’. Neil Simon’s Plaza Suite was produced instead.

The repercussions for Ryga were devastating. “The potentially greatest playwright in this country was blacklisted,” theatre director and impresario Richard Ouzounian has claimed, “as carefully and as thoroughly as any one of the ‘Hollywood Ten’ were under McCarthy.”

Ryga was born in Deep Creek, Alberta in 1931. He was raised by poor immigrant Ukrainian parents as a Catholic on a farm in northern Alberta. Maggie de Vries, winner of the first Ryga Award in 2003.

After seven years in a one-room country school, he left to work at a variety of occupations. In 1949, his writings for various competitions earned him a scholarship to Banff. He studied with Dr. E.P. Conklin of the University of Texas, Jerome Lawrence and Burton James. His first play broadcast on television, Indian (1961), was based on his experiences working with Cree Indians on his father’s farm during a period when Ryga was recovering from a bout of pneumonia. He understood how the Crees could view white man’s society as a prison. “Indian emerged out of the soil and wind of a situation in which I was painfully involved,” he later wrote.

This frenzied burst of activity included drafts for at least six unpublished novels, The Bridge (1960), Night Desk (1960–later published in 1976), Wagoner Lad (1961), Poor People (1962), Sawdust Temples (1963) and Old Sam (1963). The volume of work attests to the passion within the man. Ryga was proud to think of himself as a commercial writer. In 1977, for example, he wrote a script for the American TV show The Bionic Woman entitled Garden of the Ice Palace–and it was bought and produced after several rewrites. But money was always scarce. George Ryga persevered from the Okanagan with scores of radio and television plays, plus a series of hard-edged and increasingly political novels published by Talonbooks. The published version of Rita Joe had helped Talonbooks grow into the country’s leading publishing house for drama, but Ryga never prospered.

“We were always broke and we couldn’t afford paper,” his wife Norma Campbell once said. “So George did most of his writing in his head and only produced two drafts, a first and a final.” Ryga was also an avid songwriter and banjo player; his son Campbell Ryga has since become a highly respected saxophonist.

In 1993, when the B.C. Book Prizes ceremonies were held for the first time away from the coast, in Penticton, on April 24, a George Ryga Memorial Gathering was held to celebrate his spirit at Okanagan College.

Coincidentally Talonbooks released a final volume of Ryga’s posthumous writing, Summerland ($19.95), edited by Ann Kujundzic. This final book is a collection of essays and excerpts that reflects Ryga’s deeply political nature and his abiding sympathy for the downtrodden.

The Ecstasy of Resistance: A Biography of George Ryga, by James Hoffman (ECW Press, 1995)