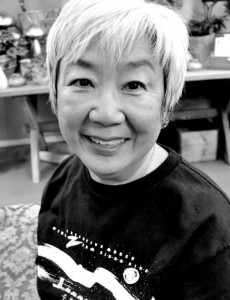 Diana Morita Cole’s Sideways: Memoir of a Misfit was launched at the Nikkei Internment Memorial Centre on September 12  in New Denver, B.C.

Sideways is published by Diaspora Press with funding from the Columbia Basin Trust and the Columbia Kootenay Cultural Alliance.

The Langham Cultural Centre will host a second launch of Sideways: Memoir of a Misfit during the Café Langham Talks in Kaslo, September 24th, Thursday, at 7 pm, at 447 A Avenue. The premiere showing of the documentary, Hidden Internment: The Art Shibayama Story, at this launch will be the inauguration for the film series as well.

Admission is by donation, and everyone is welcome. Diana Morita Cole’s Sideways: Memoir of a Misfit ($25) chronicles the childhood of a Nikkei girl born as a captive in one of the many internment camps constructed by the American and Canadian governments during WWII,

Diana Morita Cole was born in Idaho, but has spent 50 years in Canada. She draws comparisons between the American and Canadian internment experiences and highlights the lives of Roy Miki and the Murakamis of Salt Spring Island in B.C. The social purpose of her book is to highlight the persecution of the Nikkei around the Pacific Rim.

Cole’s story begins inside her mother’s womb, where she overhears the prison doctor speculate that her 44-year-old mother may not survive childbirth. Cole writes, “Luckily I, a mere fetus at the time, had big ears, so I turned a somersault in utero—one of my rare moments of grace—and my forty-four year old mother, a prisoner at the Minidoka War Relocation Center, survived.”

Diana Morita Cole’s first chapter of Sideways: Memoir of a Misfit was published in The New Orphic Review and shortlisted in the Open-Season Competition of The Malahat Review creative non-fiction category for 2013. It was also nominated for the Pushcart Prize Anthology for 2015.

Cole has initiated various other projects to help diminish racism and foster justice, peace, and environmental awareness. She was a co-founder of the Seventh World, an association of biracial couples that created a writing contest for London Ontario K-12 children to promote racial harmony. This program has since been implemented in several other communities in Southwestern Ontario.

Diana Morita Cole has also made presentations to Parliament, advocating the banning of Agent Orange, and to the US Congress, advocating against landmines. Her work fighting against the spraying of Agent Orange in Nova Scotia forests and organizing the Concerned Residents of Clare has been referenced by Mark Richard Leeming in his 2013 Dalhousie University Doctoral Thesis, In Defense of Home Places: Environmental Activism in Nova Scotia, 1970 – 1985.

She resides in Nelson, British Columbia where she has organized forums in support of Residential School victims, and is a member of the Uphill Writing Group and the Nelson Storytelling Guild.

Books can be ordered by emailing info@diasporapress.net