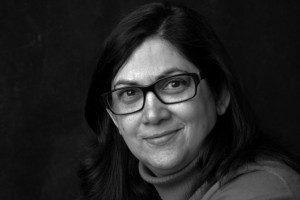 Shani Mootoo, whose first book was published in B.C., made the cut for a third time.

This is the third time that Shani Mootoo has been a Scotiabank Giller nominee (she made the shortlist in 1997 and the long list in 2009). Moving Forward Sideways Like a Crab (Doubleday Canada) is an exploration of family and gender.

After being discouraged from a writing career by her family, Mootoo moved to Vancouver at age 24 to develop her visual arts practice. But a friend saw a pile of writing beside her computer and showed it to local book publisher, Press Gang. Mootoo still wasn’t interested although she did give a reading at a Rungh Society literary event. Within days a book contract arrived in her mailbox.

After getting advice from her cousin Trinidadian-born Neil Bissoondath, himself a nephew of Trinidad’s most famous author, V.S. Naipul, Mootoo asked – and received – a small advance. Her first book was the fiction collection Out on Main Street (Press Gang, 1993), and was soon endorsed by literary icon Jane Rule.

Her first full-length novel was a major success. Cereus Blooms at Night, (Press Gang, Grove Press 1997) was shortlisted for the Scotiabank Giller Prize in 1997, the Ethel Wilson Fiction Prize and the Chapters Books in Canada First Novel Award and was long-listed for the Man Booker Prize. It won the New England Book Sellers Award in 1998.

Mootoo’s second full-length novel, He Drown She in the Sea (M&S 2005) made the long list for the International IMPAC Dublin Literary Award in 2007. Then Valmiki’s Daughter (2009), depicting a father and daughter who struggle to come to terms with secrets, was long-listed for the Scotiabank Giller in 2009.

Although she now lives in B.C., Kathy Page was born and lived much of her life in London, England. She has taught fiction writing in universities in the UK, Finland and Estonia, and held residencies in schools and a variety of other institutions/ communities, including a fishing village and a men’s prison.

In 2001, she and her family moved to Salt Spring Island. She has written for radio and television and her short fiction is widely anthologised in the UK. The Story of My Face (Weidenfeld and Nicolson, 2002) was long-listed for the Orange Prize. Alphabet (Weidenfeld and Nicolson, 2004) was a Governor General’s Award finalist in 2005. The Find (McArthur @ Co. 2010) was shortlisted for the ReLit Award in 2011.

Paradise and Elsewhere is the first novel of Page’s to make the Scotiabank Giller.

Inspired by her family’s history, Padma Viswanathan’s novel The Ever After of Ashwin Rao (Random House 2014) is set almost twenty years after bombing of the Air India flight from Vancouver that killed 329 people off the coast of Ireland. As the long trial of two terrorist suspects is underway, Ashwin Rao, an Indian psychologist trained in Canada, returns to interview people who—like himself—lost loved ones on the plane. His “study of comparative grief” unexpectedly leads him into a deep association with one family in particular.

Padma Viswanathan is a fiction writer, playwright and journalist who was born in Nelson, B.C. and grew up in Edmonton, Alberta. Her debut novel, The Toss of a Lemon, was shortlisted for the Amazon.ca First Novel Award, the Commonwealth Writer’s Prize Best First Book Award (Canada and the Caribbean) and the PEN USA Fiction Award, and published to international acclaim. Her work has received many awards, including fellowships from the National Endowment for the Arts and support from the Canada Council, as well as residencies at the MacDowell Colony, the Banff Centre and the Sacatar Foundation.

She now lives, as she puts it: “on a hilltop in Arkansas with my husband [the poet and translator Geoffrey Brock], children, parents and a dizzying array of animals.”