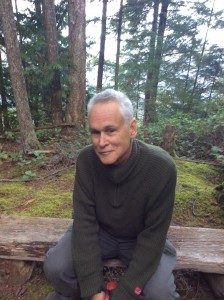 Howard Macdonald Stewart presents his book, Views of the Salish Sea: One Hundred and Fifty Years of Change around the Strait of Georgia (Harbour Publishing, $39.95) at UBC’s Green College Coach House on Tuesday, March 13 from 5-6:30 pm, with a reception to follow. The event is free and open to the public.

Stewart’s Views of the Salish Sea (Harbour $39.95) examines the Strait of Georgia spanning 300 kilometres from Victoria to Campbell River, supporting over 200 species of fish, 130 species of marine birds, and 16 kinds of marine mammals. Howard Macdonald Stewart of Denman Island variously describes the “Salish Sea” over a 150-year period as a highway, a barrier, a waste dump, a recreational haven and more–in effort to encourage its preservation.

[Howard Macdonald Stewart’s Views of the Salish Sea: One Hundred and Fifty Years of Change around the Strait of Georgia (Harbour) appeared on the B.C. Bestseller List for six weeks between October 2017 and January 2018. It was longlisted for the George Ryga Award for Social Awareness and is finalist for the British Columbia Historical Federation’s Historical Writing Competition’s top prize, the Lieutenant Governor’s Medal for Historical Writing.]

Stewart was born and raised on the shores of the North Salish Sea and has worked for the United Nations, local and national governments, international agencies, communities, NGOs and industries around the world. This book grew out of his Ph.D thesis in geography at the University of British Columbia. “Many books have been written about individual communities and industries around this waterway,” he says, “but none have examined the region as a geographical unit with its own dynamic systems which can best be understood as an interrelated whole.” 978-1-55017-803-6

One Response to “Salish Sea and thee”