It took Isaac Thau many years to realize heros weren't Hollywood stereotypes; they were holocaust survivors like his father Rubin. 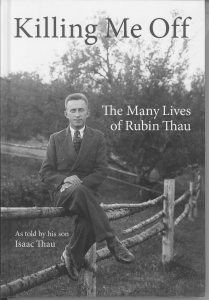 A photo of Rubin Thau in Hungary, 1936 graces the cover of a book about his life penned by his son..

“They were people who had the resilience to not only survive horrors but to create new lives and futures from the ashes of their lives,” says Thau.

Isaac Thau’s Killing Me Off: The Many Lives of Rubin Thau is a privately published biography of a Shoah survivor who lived in Vancouver from 1996 to 2006.

Rubin Thau resided in Winnipeg from 1947 to 1996 after a stint in Israel from 1944 to 1947. Born and raised in the Austrian town of Zablotov, Rubin was an Ashkenazi Jew descended from Thessalonica, Greece.

In 1941, in his early thirties, Rubin was loaded onto a cattle car after a Nazi raid on Zablotov on December 22nd, but he managed to jump off with two others as they were crossing the River Prut. The other two men were shot and killed. Rubin was shot twice in the leg but managed to bind his wounds with spider webs and walk back to Zablotov where he found his house abandoned. He grabbed some family photos (reproduced in the book) and some hidden jewelry and coins that enabled him to pay a farmer to hide him.

When Rubin ran out of money, the farmer forced him to flee. Rubin escaped to Poland, where he mostly hid in forests. He tried to gain refuge with an aunt on his father’s side who lived in Czechoslovakia but when he arrived, she exclaimed, in German, “All you Polish Jews are going to get us all killed!”

Rubin wrote off that branch of the family forever.

Shortly after, captured by the Russians, he was roped and dragged behind a horse for a kilometre. Placed on a transport to Siberia, he told the Russians he was a mechanic and was inducted into the engineering corps for approximately one year. He escaped to Czernowitz, Romania, only 60 kilometres from Zablotov. He was recaptured in Dragasani, 600 kilometres away, but managed to obtain a Romanian Army coat and a false passport. He finally found the Jewish Underground in Bucharest, enabling him to complete a three-month exodus, via Turkey, to Palestine. 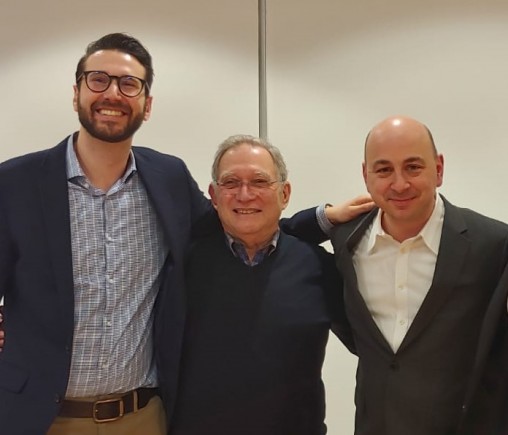 Isaac Thau (center) at a Jewish charity event in Vancouver, 2020.

After emigrating to Canada, Rubin raised three children: a son, Isaac and two daughters, Chana and Gail. Isaac, who uses the term ‘Shoah’ rather than ‘holocaust’ throughout his book, writes that his father was a complicated man: “He never could stop talking about the war,” he says, adding “He could not bear to speak about it but was incapable of burying it either as so many survivors did. He was worried about people becoming comfortable and complacent with the story of the Shoah.”

As a child being raised by Rubin, Isaac says he thought of superheroes as looking like Americans, “tall and muscular,” only to realize much later “that the supermen amongst us were people like Dad: men and women who survived untold hardships and horrors. They were people who had the resilience to not only survive horrors but to create new lives and futures from the ashes of their lives.”

[Rubin Thau spent the last four of his 96 years in the Louis Brier Home for the Aged in Vancouver. This story is from that time, as recalled by Isaac. – Ed.]

One of the funniest stories, at least in retrospect, occurred towards the end of Dad’s life. One morning I received an agitated call from him. He told me someone was trying to kill him and that I needed to come to the Brier right away! When I arrived, I asked the duty nurse if there was any truth to the story Dad had told me. She slowly allowed that there was some truth to his story. There was a wheelchair-bound resident named Walter who would try to ram Dad with his wheelchair in a slow but determined motion whenever he saw him. Staff were concerned that Dad might be injured if Walter were to ever succeed. I made some inquiries about this situation and discovered that it had begun the previous Friday when Dad was attending the Kabbalat Shabbat service. The shul is off the main lounge where they set up a Kiddush on Friday. The delicacies included rye bread, egg salad, tuna salad and most importantly, marinated herring. While sitting in the service, Dad saw Walter eating some of the Kiddush herring. As I have said, Dad was always hungry and very cranky when it was time to eat. He also had an antipathy to Walter, given that he was Ukrainian and the Ukrainians where Dad lived were best noted for their hatred of Jews. He told Walter to stop eating as the service was not finished. Walter ignored him and continued. To which Dad reportedly yelled at him, “Get out. You don’t belong here!” After that confrontation, Walter started gunning for Dad.

It was, at the least, a bureaucratic glitch to place Walter in a predominantly Jewish home with a fair number of resident survivors. I went into Dad’s room to discuss the situation. I suggested that he and I go speak with Walter to clear the air. Dad told me that that would not be happening. I had to put a stop to it, or he would. As Dad shifted in his chair, an open long-bladed Swiss Army knife fell to the floor. I asked him what the heck that was. He calmly stated, “I told him if he touches me one more time, I’m going to kill him.” I retrieved the knife, closed it and put it in my pocket. Dad demanded its immediate return. He told me he had had the knife since 1909 and that “he did not raise my son to be a thief.” The knife had a plastic handle. I informed him that plastic was not invented until the 1960s, so he couldn’t have had it since 1909.

Rubin Thau passed away peacefully, surrounded by his family at the Louis Brier Home in Vancouver on March 11, 2006 at the age of 96.