Evolution of a trilogy 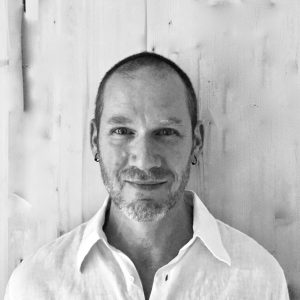 With the publication on October 15 of My Two-Faced Luck (Now or Never, 2021) that examines the queer life of a man from the 1940s to the 1970s, Brett Josef Grubisic will have completed his “River Bend Trilogy.”

The first  title of the trilogy, The Age of Cities (Arsenal Pulp, 2006) was followed up ten years later with From Up River and For One Night Only (Now or Never, 2015).

In the following Q&A, Grubisic describes the evolution of the three books. 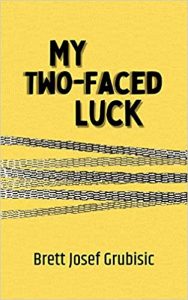 BCBookLook: Did you plan this trilogy before you wrote the first novel 15 years ago or did it evolve after the second or even third title?

Brett Josef Grubisic: The Age of Cities was the first fiction I wrote of any kind. Completing it – and being satisfied with the result – was as far ahead as I looked then. (Generally, I’m not much of a long-range planner.) I returned to the same setting but a different decade in From Up River. While writing it, I knew a third novel made a kind of poetic sense. At that point, though, I had no clue about the story.

BCBL: What was the grand scheme for the trilogy? Are there recurring characters? Recurring themes?

BJG: All three novels are set in River Bend City, a scruffy fictional town in the Fraser Valley that’s modeled on Mission, B.C. It’s my old stomping grounds. During the wild period of my father’s three marriages, my family lived in a trailer park on Hatzic Island, just east of Mission; plus, I was in elementary school for a few grades in Mission and for chunks of junior and senior high school. 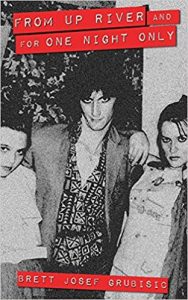 The books are standalone but echo each other stylistically. Also, they all mull over ideas about how queer culture might get transmitted from generation to generation. They’re organized unconventionally too. The novels all present stories through frameworks. Age takes the form of a lost manuscript (and faux-professorial Introduction, complete with photographic ‘documents’ and samples of an unknown novelist’s handwriting), while From Up River features drawings, notes, song lyrics, diary entries, journalism, and even sign language symbols. In Two-Faced, an inmate’s cassette recordings, which are lost and then recovered twenty years later and reorganized according to the whims and guessworks of their listener… continues with the stylistic through-line.

While there’s no recurring character, the novels focus on queer lives in River Bend at different points in history.

BCBL: Please provide a short summary for each book in your own words. 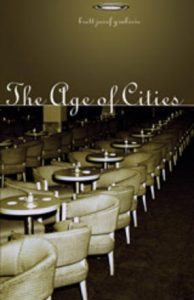 BJG: A story within a story, the core of The Age of Cities is an untitled handwritten manuscript a student finds inside a vintage Home Economics textbook. He shows it to his professor, who then publishes it and discusses the manuscript as a document representing lost queer history—a gay fiction manuscript that would not have been published in the early 1960s because gay was ‘too much’ for lettered Canadian society then. The manuscript itself depicts a weird journey of self-discovery for one Winston Wilson, a teacher in River Bend City. His visits to a medical specialist in Vancouver accidentally expose him to a shadowy queer society—about which he has radically mixed feelings.

From Up River is set in the autumn and winter of 1980/81 and offers a comical exploration of two sets of siblings led by two elder brothers (both gay) in Grade 12 who decide to become a New Wave band (called the Iron Curtains) and enter a Battle of the Bands contest in Haney.  Their quests to raise funds and learn to play Gary Numan songs lead them to all kinds of quandaries.

My Two-Faced Luck tells the life story of an unnamed gay inmate in Horsetail Institution, located in River Bend Municipality. Before he dies in River Bend Hospital in 1990, the inmate records episodes from his life in rural Massachusetts (b. 1927), New York City, Washington DC, and San Francisco for a memoir project. Decades later, the infirmary nurse to whom the inmate bequeathed the jumble of tapes faces a sombre winter after divorcing her wife. Rather than dwelling on her own grief, she turns to the tapes as a project. His fragmented project becomes her psychological one that also serves to complete his.

BCBL:  What were the challenges and unexpected discoveries of your trilogy as it developed over three books?

BJG: There were the usual challenges, which are always related to finding the free time when working full-time (in a job that pays the mortgage, which is not novel-writing) and swatting away the voice that whispers “Why bother?” etc. But in my experience, that’s the case for one book, or two, or a trilogy.

I expected I’d have to really try to make the trilogy seem like a trilogy, but once I used a looser definition of the term, I stopped trying to have the books explicitly linked by characters, plot points, and key words. The geographic setting and focus on sexual minorities supplied two commonalities.

The memory-work was surprising. Once upon a time, I considered Mission a nowhere kind of town that I felt happy to have left behind. I’ve spent years pondering its roads and businesses and historical development and so forth, and feel I’ve come to know it and appreciate it much better now than I ever did before.

Before Two-Faced, I was researching literary depictions of murder in Canada for an ill-fated scholarly project. I came across a luxury liner murder case while flipping through an encyclopedia-style book of famous real-life murder cases. The entry’s first line described the murderer as “homosexual.” Other murderers were defined as “doctor” or “bricklayer.” His characteristic feature, then, was his sexuality. The way the authors identified him stuck with me. I guess the choice the authors made irked me. Anyhow, I later discovered he’d died in Mission after being incarcerated in Ferndale, which is within Mission’s municipality. That guy became the inmate.

BCBL:  Let’s go into more detail on the last and most recent title, My Two-Faced Luck. Instead of a straightforward fictional memoir, why did you tell the prisoner’s story through a retired nurse?

BJG: Hmm, there were a few reasons for that. Stylistic ones, as mentioned, that would align Two-Faced with the previous two novels; for me, they needed to read as novels that shared a few storytelling techniques. The framing narrative of Two-Faced references Age of Cities quite clearly, I think.

In a similar way, I was interested in presenting modes of queer cultural transmission. The prisoner is decades older than Seerat, the nurse. The limited opportunities and hardships and poor coping mechanisms his recollections recount seem largely foreign to her. For Seerat and her girlfriend, all that belongs to a bygone era, best forgotten. And yet in listening to his historical account of the ‘bad old days’ she learns about their commonalities as well as where her generation emerged from, historically speaking. In choosing to transcribe his tapes, turn them into an ordered, accessible story, and to submit the memoir to a publisher to bring the inmate’s story to public recognition, she’s preserving a forgotten story and bringing its relevance to newer generations. She makes that extinguished life part of their generational knowledge.

Lastly, I wanted to emphasize the fictionality of the story. Two-Faced is based on the defendant in a real-life murder trial in Vancouver during the mid-80s: in 1985 an American from San Francisco was charged with first-degree homicide for a death-by-bludgeoning aboard a luxury liner off the coast of Victoria. For the most part, Two-Faced imagines that man’s life and times up until 1985, the year of the murder. I had no real interest in researching or revisiting the murder and trial. I wanted to imaginatively explore the ‘behind closed doors’ existence of a gay man whose heyday, such as it was, covered the 1940s to 1970s. I hoped to explore the history of the unnamed inmate and to have him hand it over to someone else… and for it to eventually be of use to her. 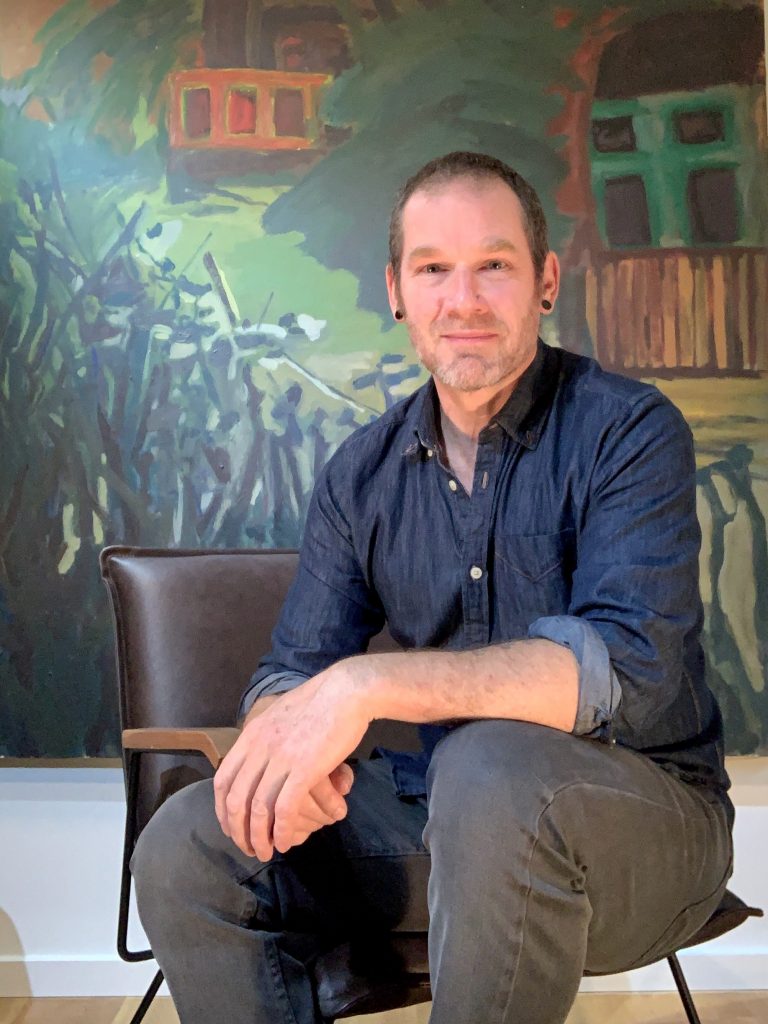 BCBL:  Did you ever feel that you were diluting the prisoner’s story by bringing in the nurse character? Did that even matter? (i.e. the interplay of the two main characters is reason enough.)

BJG: I was happy with the nesting stories. The prisoner’s words take up at least 90% of the book, so to me they don’t seem diluted at all. Plus, I wanted their relationship to exist. For him to connect with someone. And I wanted their connection to mean something more than mere politeness between an old, lonely, and ailing patient and a warm-hearted nursing assistant who’s new to the job.

I’m fond of the idea of one generation learning something valuable and instructive from another that came before it (even if that’s just a conceit for a piece of fiction). I thought having his story become something that she revives from the obscurity of her dusty attic would be fruitful. The story helps her in her own misery; she, in turns, hopes to resurrect him, in a sense, or the story of his life at least, for posterity.

BCBL: Why the particular interest in closeted gay life? Or is this a way to add tension and drama to the story?

BJG: Facts or historical truths dictated the abundance of closeted characters to me.

It’s 2021, same-sex marriage has been possible in Canada for sixteen years, and people are still closeted… when looking at a rural character born in ’27, or who was an adult in the 1950s, or an adolescent in 1980 (which are, respectively, the situations of Two-Faced, Age of Cities, and From Up River), the condition of “closetedness” – and the narrow range of locational contexts for being unapologetically gay – change massively.

The man my inmate character is based on was drafted in 1945 and worked for the U.S. military during the Cold War: what else could he be but closeted? He very much witnessed the results of public homosexuality: it was something one was accused of and punished for.

BCBL: What is your interest in prisons? Is it a metaphor?

The real-life man found guilty of murdering his elderly socialite employer aboard the luxury line… he died in Mission Hospital after his transference to Ferndale Institution (the former name for Mission Institution). The last places he saw were a prison and a hospital. That’s just historical record. The locations work nicely as metaphors, though, I have to admit.