Edwin Wong spent 13 years on a new theory of theatre. 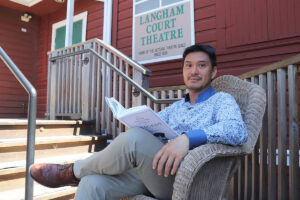 Edwin Wong works as a plumber by day and indulges his obsession for drama in his spare time.

Here Edwin Wong chats with BCBookLook about his passion for theatre and the books he has recently written about “Risk Theatre.”

Edwin Wong is a classicist and theatre researcher specializing in the impact of the highly improbable. He upended dramatic literary theory with his 2019 book, “The Risk Theatre Model of Tragedy” (FriesenPress $17.99). That launched an international playwriting competition (risktheatre.com) and his second book, When Life Gives You Risk, Make Risk Theatre: Three Tragedies and Six Essays (FriesenPress $18.99), was released this year. –Ed.

BCBookLook: When did you become interested in theatre and decide to pursue the study of this literary art? Is it something you have been passionate about from childhood? 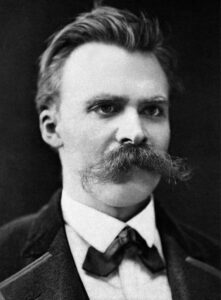 Here’s the story. During my teens, I discovered the German philosopher, Friedrich Nietzsche. I was at Munro’s Bookstore [in Victoria], and they had a whole shelf of his many titles. Quite randomly, I bought The Birth of Tragedy. Up to then, I had been reading Hardy Boys books and comics. The Birth of Tragedy— Nietzsche’s theory on how the dramatic art form of tragedy begins and ends—blew me away. “God, this person can write,” I thought. I knew I had to dedicate my life to coming up with a theory of tragedy myself.

Because Nietzsche was a classicist who specialized in ancient Greek and Latin, I did the same, enrolling at UVic and then going to Brown University. All this time I was reading and seeing plays, wondering how someone could create a modern theory of tragedy. I’m 47 now. It’s been a long time. It’s amazing how much of a one-trick pony I am. The journey has been amazing. I’ve had so many great teachers along the way who’ve inspired me to keep going.

BCBookLook. Describe your early memories of going to plays. Were there any particular “Eureka” moments that you care to share? And did you want to become part of theatre early on, as an actor, director, playwright or producer?

Edwin Wong: A great Eureka moment came in the second year of the Risk Theatre Modern Tragedy Playwriting Competition (the competition is in its fourth year now). Each year, we workshop the winning playwright’s play. Then we perform a staged reading through Janet Munsil’s A Canadian Plaything. In the second year, I wanted to lead the workshop and direct the reading. This way, the workshop and the reading could really focus on risk, the unexpected, chance, uncertainty, dancing on the edge, and all the best things that make theatre explosive. But the thing was, I had never done this before. Most of my experience in theatre is on the theoretical side. I had done little hands on. 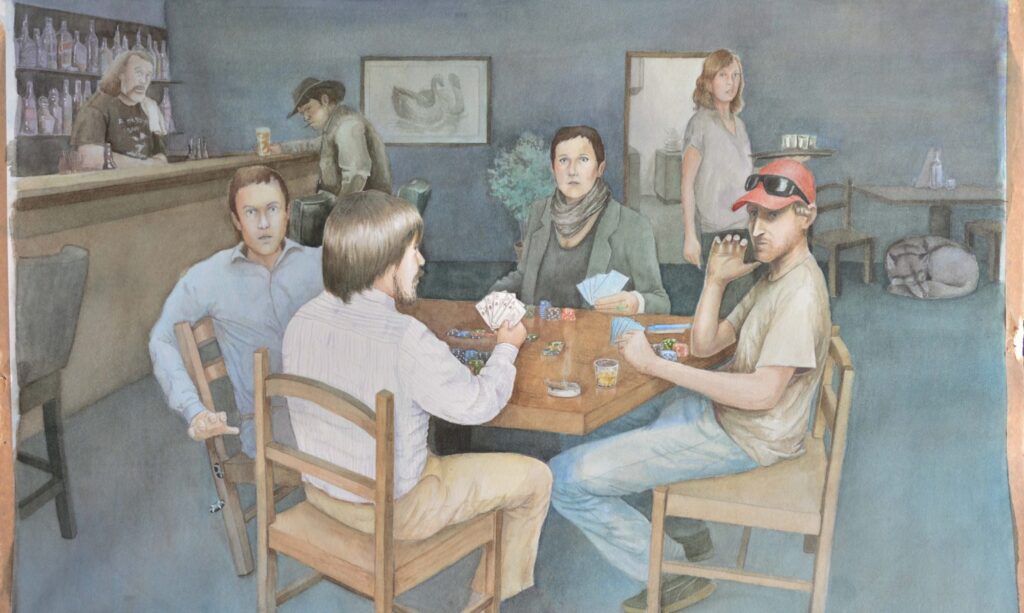 I learned that theatre is a team effort. Bring together the right people and everything just comes together. Anton Brakhage and Kara Flanagan at Theatre Carpe Diem had some great tips. The actors—Vishesh Abeyratne, Leslie Appleton, Anthony Gaskins, Alissa Grams, and Wayne Yercha—all brought their professionalism to the table. The Eureka moment is that in theatre and in life, bring together the right people, and it will come together. Theatre is a distinctly human phenomenon, a shared vision of humanity.

BCBookLook: When did you start to focus on the phenomenon of risk and its influence/impact on human lives?

Edwin Wong: Back in the winter of 2006, I was walking through the big Borders bookstore in Providence Place Mall. A book in the economic section caught my eye: mathematician, philosopher, and trader Nassim Nicholas Taleb’s Fooled by Randomness: The Hidden Role of Chance in Life and in the Markets. It has a really catchy cover where parts of the letters are obliterated and you have to guess what the title reads. Anyway, Taleb’s take is that traders blow up in the market, losing stupendous sums of money when they underestimate the impact of low-probability, high-consequence events. They plan on history repeating itself and the dangers that they can foresee. But they don’t plan for what they don’t see coming. The problem is, something unexpected always happens. Then they blow up in spectacular fashion. When I read his book, I thought: “This is exactly what happens in tragedy, in the plays of Shakespeare and Sophocles, of Arthur Miller and Eugene O’Neill.” Tragedy can be looked at as the dramatization of risk events gone awry. It was at this point that I started writing the first book, The Risk Theatre Model of Tragedy: Gambling, Drama, and the Unexpected. Because it was written from the ground up as an entirely new theory of drama, it was a lucky 13 years in the writing. 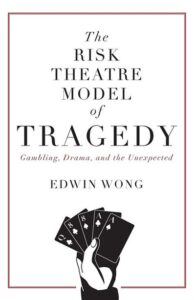 BCBookLook: Briefly, describe your Risk Theatre Model of Tragedy in everyday terms. What do you mean by the statement that “risk is the dramatic fulcrum of the action” in plays?

Edwin Wong: Risk is the fulcrum because, in risk theatre, risk triggers the low-probability, high-consequence event. When a character “goes big” that’s when things start getting interesting. I like the gambling analogy. If you like watching gamblers, you’re not going to watch them play at the nickel and dime tables. You’re going to watch the high rollers play at the no-limit tables because it is at the no-limit tables that the spectacular blow-ups happen. The premise of risk theatre is that a play is entertaining because it dramatizes the hero-gambler going all in, concentrating everything on one position. If it works out, then, great. But, if the unexpected happens, then, watch out! There is a thrill for the audience in watching the unexpected happen because, well, the unexpected is unexpected.

BCBookLook: As you have started a new conversation in the study of theatre, have you encountered backlash to your ideas?

Edwin Wong: A lot of the criticism aimed at the first book was that it hardly discussed the established theories of tragedy. In the first book, I hardly talked about Aristotle, Hegel, Nietzsche and others. That’s a fair point. The reason for this was that the first book came in at over three hundred pages, and I needed all of them to unfold how risk works in drama. I introduced a whole new dramatic vocabulary based on risk: the poetics of chaos, the counter-monetization, the opportunity cost of choice, and so on. There wasn’t space. In the second book, I’ve started to compare and contrast risk theatre to Aristotle’s Poetics. And in the essays that I’m currently working on, I’m branching out to differentiate risk theatre from the literary theories of Nietzsche, Freud, Jung, Barthes and Foucault. 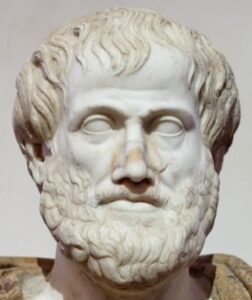 The second type of backlash to risk theatre is that it is not Aristotle’s Poetics. For many theatre practitioners, Aristotle’s theory of catharsis, his theory of tragedy based on the feelings of pity and fear is the be all and end all. In the second book, I’ve extended an olive branch to the folks who want a theory based on emotion. I argue that the emotional impact of risk theatre is anticipation (for the unexpected) and apprehension (for the bad consequences that must follow).

The third type of backlash is that the idea of risk is just too vague. Risk can mean anything. That is true. But I would say that is the reason why I chose risk: like the best terms, it is fruitfully ambiguous.

BCBookLook: You are starting to get invitations around the world to discuss your new theories. Name some of the places where you have presented your ideas and if you have the dates, please provide them. Any memorable moments?

Edwin Wong: In March 2022, I had a chance to direct a staged reading of Aeschylus’s Seven against Thebes in North Carolina at the annual meeting of CAMWS, the Classical Association of the Middle West and South. I also presented on how to interpret ancient plays through the lens of risk and chance. A few months prior to that, in November 2021, I was invited by the University of Coimbra and Marionet Teatro in Portugal to talk at their inaugural “Theatre about Science” conference. There, I gave a paper that analyzed the action in Shakespeare’s Othello through Bayes theorem, a statistical tool that calculates the probability of guilt. There’s a lot of cool concepts in probability theory that can be brought to theatre. The intersection between probability theory and theatre is a great unexplored territory.

Since the first book came out in 2019, and now with the second book, more and more people are getting interested in risk. In the last year, I’ve also been invited to talk at the Kennedy Center and Working Title Playwrights (Atlanta). Just today I was on a Zoom call to a playwriting group in LA called Playwrights Think Tank. It’s an exciting time for risk theatre, this grassroots arts movement based right here in BC, Canada.

One memorable moment that gives you a better idea of me comes from the Portugal conference. On the last night, during the banquet, the lady next to me, who had come to see my talk, asked which university I was from. I said: “University? I’m a plumber!” She fell out of her chair laughing. She replied: “Okay, you have to tell me your story: THIS is what I came all the way from Brazil to hear!” I do my theatre research on the side. During the day, I’m a plumber with PML Professional Mechanical. We work with other trades to build schools, hospitals, high-rises, auditoriums and theatres. I work with a great team there, and anyone I’ve worked with long enough—Joe Bell, Dave Desjardins, Gord McClaren, Collin Squire, and Jason Stewart—knows that I like to talk theatre. A lot of the way I talk about theatre, about theatre as a set of blueprints, about the tools of the trade, about processes, I got from talking with the crews. So that’s probably something you didn’t know about me that’s unique.

BCBookLook:  What gave you the idea for a competition?

Edwin Wong: In addition to the workshop and the staged reading, the competition awards over $13,000 annually to playwrights. For people to be interested in risk theatre, you have to offer them a reason to be interested. The competition is also a test. There’s are a lot of bogus theories of literature out there. You’d never know how crappy they are, because they are never put to the test. I wanted to put risk theatre to the test because I’ve wagered all-in that, in ten years, risk theatre is going to be igniting a whole new way of interpreting, writing, and producing theatre. 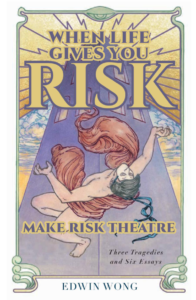 BCBookLook: What will readers learn from your new book, When Life Gives You Risk, Make Risk Theatre?

Edwin Wong: That theatre is a dress rehearsal for life. You go to the theatre, and see the effects of risk and chance so that you can do better in life. A lot of the time, we live life based on forecasts, predictions, and projections. We don’t factor chance and blind luck into these calculations. Risk theatre reminds us it’s not what we plan for that affects us most. The empire of chance is truly powerful, and a force to be reckoned with.

BCBookLook: Anything else you want to add?