What two childcare workers witnesssed at an Indigenous school residence 51 years ago. 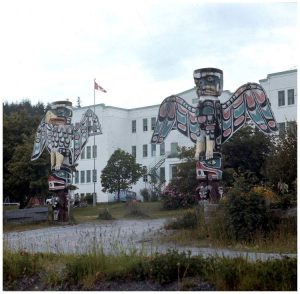 The newly-wed couple were hired to work at the Alert Bay Student Residence in 1970. Within days of starting their new jobs, they were exposed to the ugly truths of what happened to Indigenous children there.

It was one of Nancy Dyson and Dan Rubenstein’s first jobs in Canada. The idealistic couple had recently left the United States to get away from the Vietnam war turmoil of the era and were in the process of seeking permanent residency status in Canada.

Their work was to look after the children at the student residence before and after school and on weekends. The residence was formerly the St. Michael’s Indian Residential School and that was the name it was still called although all schooling now took place at the Alert Bay public school and Port McNeill’s high school.

Dan and Nancy couldn’t help question the way the school was run under a punitive philosophy. Four months after their arrival, a delegation from the Department of Indian and Northern Affairs visited St. Michael’s and the couple presented a long list of concerns, which were ignored. The next day they were dismissed by the school administrator.

Decades later in 2015, the Truth and Reconciliation reports divulged survivor’s stories about Canada’s residential schools, shocking Nancy and Dan. “When we read the survivors’ statements and realized the lasting, tragic legacy of the schools, we felt compelled to share our story.”

Encouraged by Chief Robert Joseph, Ambassador of Reconciliation Canada, Nancy and Dan published St. Michael’s Residential School: Lament & Legacy (Ronsdale $21.95). “You must tell your story,” Chief Joseph counselled the couple. “Tell what you witnessed so no one can deny what happened. This is so important to the survivors.”

Following are two excerpts from the tell-all book, written primarily from Nancy’s point of view and including passages from the Truth and Reconciliation reports that relate to the couple’s experiences.

At five o’clock, Dan and I followed the children down a steep flight of stairs to a dark, musty dining room in the basement of the residence. The children sat on metal chairs at long, grey folding tables. Bare fluorescent bulbs cast a green light over their faces.

Dan and I sat at a table with a group of little boys. When they looked at us and smiled, there were gaps where they had lost their baby teeth. I guessed that they were young, five or six years of age.

“Ahem.” A white-haired man in a black suit stood and cleared his throat. His face was thin with a pointed nose and a tic contracted his features into a grimace. As he brought his hands together for prayer, his bony wrists extended well past the cuffs of his jacket. He cast his eyes around the room, warning all to be quiet. Then he intoned, “O Everlasting God, Who hast ordained and constituted the services of angels and men in a wonderful order; mercifully grant that, as Thy holy angels always do Thee service in heaven, so by Thy appointment they must succour and defend us on earth. Through Jesus Christ, our Lord. Amen.” His Adam’s apple bobbed up and down as he spoke. He reminded me of the character of Ichabod Crane in “The Legend of Sleepy Hollow.”

The older students began ladling soup from metal pots into Melmac bowls. The bowls were passed, hand to hand, to each child. A basket of white Wonder Bread was also passed down the tables and each child eagerly laid two slices beside his plate. The bread disappeared quickly, unlike the watery and tasteless soup. The children, their eyes fixed on their bowls, ate in silence. The meal was meagre and I thought the children must be hungry.

“Is there any joy here?” I asked myself.

“Again and again, former students spoke of how hungry they were at residential schools. Students who spoke of hunger also spoke of their efforts to improve their diet secretly.”

-The Survivors Speak, A Report of the Truth and Reconciliation Commission of Canada, p. 7.

[Shortly after their first evening, Nancy and Dan witness the induction of four children into the Residence]

We heard footsteps and a man pushed four children into the room. “Here they are,” he said proudly. “I had quite a struggle getting them out of Bella Bella. A granny put up a fight but I got ’em.” He wiped his hands vigorously on his pant legs. Then, frowning, he examined his hands, front and back, to see if they were soiled before hurrying up the stairs and disappearing.

The children, two girls and two boys, clustered together with their heads lowered and eyes downcast. Their chests rose in quick, shallow breaths. The small girl clutched the hand of the bigger girl. The matron used a heavy glove to open the boiler door and, as air whooshed into the firebox, the flames turned a fiercer shade of orange. The children looked up with fear. The matron pulled a pair of heavy shears from her apron pocket and grabbed the smaller girl. She quickly cut the child’s hair and let it fall in a dark mass at her feet. Then the matron cut the clothes from the girl’s small body until the child stood naked and trembling. The other children gasped.

Dan protested, “Is this necessary?”

She gathered the hair and clothing and threw them into the fire.

“But they’re frightened,” I said, shaking.

The matron ignored me and went on to the next child. When all four were shorn and naked, she pushed the children to a wall where six shower heads ran along a galvanized pipe. The matron carefully took off her white apron and hung it on a hook, then put on a rubber smock. She turned on the showers and washed the children’s heads and bodies with harsh soap. The little girl cried out.

But the matron shook her head. “I guess you’ve never seen a hundred kids with lice,” she said. “Well, I have. All it takes is one child. Then, pretty soon, they’ve all got lice.”

Dan and I grabbed towels from a row of pegs and wrapped them around the children.

The matron led us to the second floor. The children shuffled barefoot, still wrapped in towels. From time to time, a soft sob rose in the little girl’s throat and she wiped her nose on her arm. The matron unlocked the infirmary, which doubled as a storeroom.

“Pull those wet towels off the children,” she told us as she opened a locked cupboard. She eyed the children and selected clothes roughly the right size for each of them. For the girls, two sets of underwear, two pairs of leggings and two shirtwaist dresses sewn in the style of the 1950s. For the boys, two pairs of briefs, two pairs of pants and two checked shirts. Socks, rolled into pairs, filled a wicker basket on the floor. “Give each of them a pair,” she told us. She motioned for the children to sit down on a bench while she found them shoes, shoes that were used and scuffed but serviceable.

Despite the matron’s comment, I was dismayed. Eighteen teenage girls sounded sufficiently challenging to me. And how could Dan care for twenty-five little boys?

The matron snorted. “It’s not a hard job. Just discipline them right from the start, and you’ll have no trouble. Remember, discipline, discipline. It’s for their own good.”

Dan and I looked at the children huddled on the bench. I wanted to tell the matron that what we had just witnessed, the children being shorn and stripped naked, was not for their own good. Instead, I pressed my lips together.

“It can start with a knock on the door one morning. It is the local Indian agent, or the parish priest, or, perhaps, a Mounted Police officer. The bus for residential school leaves that morning. It is a day the parents have long been dreading. Even if the children have been warned in advance, the morning’s events are still a shock. The officials have arrived and the children must go. For tens of thousands of Aboriginal children for over a century, this was the beginning of their residential schooling. They were torn from their parents, who often surrendered them only under threat of prosecution. Then, they were hurled into a strange and frightening place, one in which their parents and culture would be demeaned and oppressed.”
-Honouring the Truth, Reconciling for the Future, Summary of the Final Report of the Truth and Reconciliation Commission of Canada, p. 37.