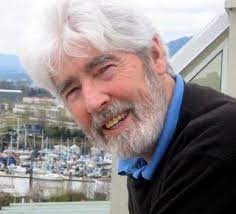 Born in Liverpool on October 7, 1930, James Heneghan came to Vancouver in 1957 where he eventually began writing fiction for young people.

His historical and realistic YA fiction won many prizes including the Sheila Egoff Award for children’s literature three times, one of which was for his most acclaimed novel, The Grave. In 2017, he was awarded the Phoenix Award for his novel, Wish Me Luck, which was also nominated for a Governor General’s Award.

Heneghan was a long-time member of the Children’s Writers & Illustrators of B.C. His CWILL colleague, Norma Charles co-authored Bank Job with Heneghan and says he was a “wise, witty and humble man who was a joy and privilege to work with.”

Heneghan once said:“I enjoy writing for children…but one thing I have discovered is that children are tough critics. They know what they like, and only your best will do.”