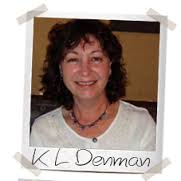 Kidlit author K.L. Denman’s latest title is Quiz Queens (Orca Currents $9.95) about boy-crazy Kiara who convinces her studious pal Jane to create a questionnaire to help find her soulmate. It makes for a creative blurb on the back of the book: “Your friend asks you to help her land the perfect boyfriend. You: A. Tell her to go away – you’re reading. B. Agree to create a quiz (even though you think it’s a bad idea). C. Withhold the surprising results when a boy you like comes out ahead. D. Try to patch things up after you both say things you regret.” Denman has written many novels for youth, including under the imprint Orca Currents that specializes in short high-interest novels with contemporary themes, written expressly for middle-school students reading below grade level. Her first work of teen fiction for reluctant readers, Battle of the Bands (Orca 2006), concerns an ambitious high school rock band named The Lunar Ticks, led by Jay, who falls in love with the leader of rival band from a different school. Me, Myself and Ike (Orca 2009), another teen novel, was nominated for a Governor General’s Literary Award in the Children’s Literature – Text category. It’s the story of a boy struggling with schizophrenia. Publishers Weekly said of the book: “A stark and fascinating portrait of a paranoid and delusional teenager… Denman deftly gets into the head of a mentally unwell teenager while telling a coherent, engaging story.” 9781459813960