Bakan reveals how billionaires use the rhetoric of serving nature and people to further colonize our bodies & minds. 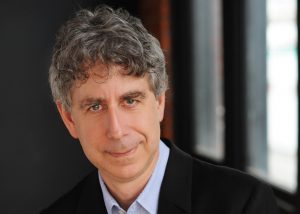 Like environmental crusader Greta Thunberg, Bakan believes CEOs are making it look like real action is happening when little is being done except clever accounting and creative PR.

When fraudster Bernie Madoff and thousands of other Wall Street swindlers jeopardized the lives of millions of Americans, big corporations did nothing to bail out the poor folks who lost their homes (although Madoff was convicted and is in jail). When it came to big banks. President Obama bailed out the swindlers.

Empowered by the following presidential administration of Donald Trump, who rejected the Paris Accord, U.S.-based corporations mostly failed to protect the general populace from a plague far more deadly than the 9/11 terrorist attacks in 2020. Big business in North America kept those meat packing plants open where Covid-19 was easily spread, sacrificed next to nothing and accepted government bailouts whether needed or not.

When the Dow Jones Industrial Average Index reached a record high, most Americans believed that was a good thing. Meanwhile, it was the dreaded boogeyman of Socialism — government bailouts — that kept North American society functioning.

This all comes as no surprise to Joel Bakan. His 2003 documentary and television mini-series called The Corporation provocatively explained why and how corporations are, by their very design, akin to psychopaths. Corporations, he discerned, are constructs invented to absolve their managers and investors of responsibility for their failures and transgressions. 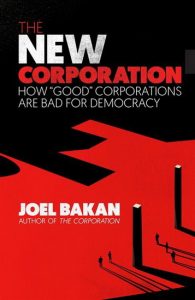 Now Bakan’s The New Corporation: How “Good” Corporations are Bad for Democracy (Allen Lane/Penguin $19.95) examines the ruse of posturing that is currently in vogue with corporations that want to persuade you they are now suddenly and fully on the side of the environment. The UBC-based law professor examines how corporations are attempting to-rebrand themselves as do-gooders, as partners with progressive organizations working to counteract climate change, etc.

Again, in tandem with a documentary of the same name, Bakan sets out to convince the reader that by slickly advertising how social and environmental values are at the core of their agendae, corporate entities are simultaneously subverting the public good, seeking more privatization, stagnating wages and only posing as environmentalists.

He also does some math. Between 1979 – 2003, wages for the top one percent in the U.S. grew by nearly 150 percent, according to Bakan, while for the bottom 90 percent wages grew by only 15 percent. He claims CEOs now make nearly three hundred times what the average workers make — compared with thirty times as much in 1980.

Bakan echoes the words of Robert Weissman, president of Ralph Nader’s Public Citizen, who notes there are no limits in the Paris Accord on continued exploration and drilling on tar sands exploration. “Thanks to big oil’s help in crafting it,” Bakan claims, “the Paris Accord is toothless.”

The list of corporate entities who have absorbed multi-billion fines is astonishing (Volkswagen tops the list at $25 billion) but companies continue to weigh the probabilities of getting caught; Google, Apple, Amazon and Microsoft continue to evade taxation. Corporations are breaking the law “on a grander scale than anything we’ve seen,” says Weissman.

“The real danger,” said Greta Thunberg at the 2019 UN climate conference in Madrid, “is when politicians and CEOs are making it look like real action is happening, when in fact almost nothing is being done, apart from clever accounting and creative PR.”

If you feel virtuous about using your blue box, putting papers in a yellow bag, you might want to consider why large corporations love to promote recycling. It shifts the responsibility onto the shoulders of private citizens and government. According to New York Times reporters Tala Schlossberg and Nayeema Raza, the recycling movement is “the greatest trick corporations ever played.”

Marriott Hotels happily reduces laundry costs by asking customers to reuse towels and “Help Save The Planet.” Meanwhile, Bakan maintains there is overwhelming evidence that recycling doesn’t work. “Much of what goes into recycling bins ends up in landfills and is burned, causing pollution and greenhouse gas emissions,” he says.

“It’s the same for climate change, where corporations deflect blame by insisting we are all responsible for the problem.” He points out that Petro-Canada has stickers on its gas pumps: “Play your part on helping reduce climate change buy using our products responsibly.” This is a rare Canuck reference. Bakan shows a tendency to overlook or avoid distinctly Canadian perspectives in favour of courting a much larger American audience. He has also chosen to publish with a distinctly, non-indie imprint owned by the German media group Bertelsmann.

Essentially, corporations are working hard to convince you that profit is not their primary purpose — and Bakan wants to prove to you it’s a smokescreen. For starters, the collusion of large corporations with repressive regimes around the planet is rarely deemed newsworthy. He notes these corporations “escape blame, quietly slipping out the back door while they bemoan the dysfunctional state of affairs they’ve helped create.”

In the so-called “free world,” Bakan alleges that corporations are “leveraging their new personas” to replace government in providing public goods and serves. (In December, Ottawa’s federal government announced it would rely on FedEx to deliver its vaccines, not Canada Post.)

He notes the “new” corporations looked “distinctly less noble” as they lined up during the coronavirus pandemic for bailouts despite record profits, tax dodging and stock buybacks while pushing for more tax cuts, deregulation and privatization.

Echoing Bernie Sanders, the new U.S. president has insisted “that big corporations, which we’ve bailed out twice in twelve years, step up and take responsibility for their workers and their communities.”

But nearly 50% of the American electorate failed to repudiate Trump. Joe Biden and the Democrats are now stuck with a crumbling economy due to an unchecked pandemic that will give rise to multi-dimensional social insecurity equal to The Great Depression of the 1930s.

We can now expect to see Joel Bakan’s third volume, perhaps entitled The Next Corporation, ten years from now, to once more lay bare the unjust fault lines of our corporate-led society. 978-07352-3884-8