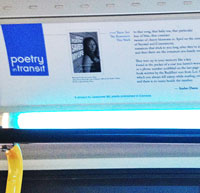 Who knew poetry plastered on bus ceilings, bus shelters and SkyTrain station walls would be so popular? Yes, commuters are bored standing around waiting on platforms and sidewalks with little to do but stare idly into space but it also telling that the quality of B.C.’s poetic output touches people and connects them to the place that is Vancouver and the province.

Started in 1996 after poet Sandy Shreve approached TransLink with the idea of exhibiting B.C.-authored poems to public transit goers and who also got the Association of Book Publishers of BC to administer the program, Poetry in Transit is now the longest running poetry on transit parogram in Canada according to organizers.

“Over the years, the program has been incredibly popular,” says Margaret Reynolds, executive director of ABPBC, which still continues administrating Poetry in Transit, and adds “We get many calls at the office from people wanting to find the books that the poems come from.”

Poems eligible for the project must be written by B.C.writers and published in book form by Canadian publishers. Poems are submitted by publishers for consideration in the project in May of each year. The works are selected by a jury comprised of a poet, a representative of TransLink, and an industry professional. To date, the project has featured hundreds of poems from established and emerging BC poets. The program has enriched the lives of many people in a variety of ways says Reynolds, “from the teacher who took a class on the transit system to read the poems and then challenged her students to locate a ‘found poem’ in their lives, to the university students who bring home their Poetry in Transit discoveries to discuss with their roommates, to the couple who read a poem from the project on the SkyTrain and decided to incorporate it into their marriage ceremony. Poetry in Transit has truly entered the lives of British Columbians.”

According to publicity for Poetry in Transit’s anniversary, here are some comments from readers that have been sent to TransLink:

“What a pleasure to sit beneath poetry on my commute. I love getting on the 135 and 145 bus when it happens to be the ‘poetry bus’ – all the ads replaced by poems. What a world it is when our commercial interests stop for a moment and yield to words.”

“I ride the bus to read the poetry!”

“Love the Poetry In Transit!  Even when I’ve read them dozens of times, I enjoy seeing what the next bus holds.”

To celebrate Poetry in Transit’s 20th anniversary, a free poetry reading event sponsored by Word Vancouver will be held on Wednesday, September 21, at The Emerald cocktail lounge at 555 Gore Avenue in Chinatown, from 7 pm to 9 pm. Hosted by Sandy Shreve, there will be readings from 20 poems from poets such as Brian Brett, Renee Rodin, Rita Wong, W.H. New, Kate Braid, Evelyn Lau and Fred Wah. Also, Margaret Reynolds will attend to read a poem of the renowned Al Purdy (1918 – 2000).

The event promises to be a fun evening and a much-deserved salute to the contribution poets have made to Vancouver’s, and the province’s, cultural fabric.

Word Vancouver will also include Poetry in Transit at its street festival on September 25. Readings will be held in the Sunrise Suite (poetry venue) by poets whose poems will be on buses this year. A new feature will see Poetry in Transit poems in special bubble gum vending machines on site (the bubble gum machines are a fundraising project for poetry activities at Word Vancouver). And there will an actual transit bus on site with poems on display.