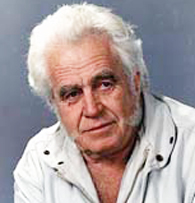 One of B.C.’s literary characters has died. Paul St. Pierre, a wry comic writer sometimes compared to Mark Twain, passed away on July 27th at his home in Fort Langley. St. Pierre had endured more than two months in the hospital with pneumonia last winter, rallied for a short while in the spring and summer and then was hit with another crisis last week. His family and two much-loved dogs were at his side at the end.

Although he jokingly referred to writing as indoor work with no heavy lifting, St. Pierre was especially adept at depicting First Nations and ranchers in the Cariboo-Chilcotin. His stories from that region showcase the humour and stubborn independence of hardy people who instinctually resent government.

In the 1960s, he wrote more than 20 scripts as the basis for a popular and award-winning CBC TV series, Cariboo Country, that launched the acting career of Chief Dan George as Ol’ Antoine. Dan George later gained stardom in George Ryga’s The Ecstasy of Rita Joe and an Academy Award nomination for his appearance opposite Dustin Hoffman in the movie Little Big Man. Cariboo Country was the first significant portrayal of non-urban B.C. culture on television that percolated beyond British Columbia.

Paul St. Pierre’s best-known book, Breaking Smith’s Quarter Horse (1966), began as a television episode called How to Break a Quarter Horse. Both became the basis for a 1969 Disney feature film entitled Smith! starring Glenn Ford with Keenan Wynn, Dean Jagger and Warren Oates. Known only by his surname Smith, the tenacious rancher enlists the help of an aboriginal, Ol’ Antoine, to help him break a horse that he believes will be an ideal cutting horse, but the story is more about Smith’s character than the horse. Smith feels he is someone who likes to mind his own business, and he is fond of sarcasm, but his strong aversion to injustice, and his instinctual need to help others, gets him into trouble and lands him before the judge. The comedy shows a serious side when Smith helps out a fugitive First Nations boy. Breaking Smith’s Quarter Horse has never been out of print since its publication.

Born in Chicago in 1923, Paul St. Pierre grew up in Nova Scotia, served in the RCAF and began his journalism career in B.C. with stints at the Columbian in New Westminster and the News Herald in the late 1940s. He wrote for the Vancouver Sun from 1947 to 1968, and again from 1972 to 1979. He served as the Liberal MP for the Coast Chilcotin riding from 1968 to 1972 and he chaired the B.C. Liberal caucus for two years. He was a police commissioner for B.C. from 1979 to 1983. His play How to Run the Country was produced by the Vancouver Playhouse in 1967. Other early books by St. Pierre include Boss of the Namko Drive (1965); Chilcotin Holiday (1970), a collection of newspaper columns; and Smith and Other Events (1983), one story from which made him the first Canadian winner of the Western Writers of America Spur Award for fiction.

Not all of St. Pierre’s writing can be characterized as humour. His televised drama, Sister Balonika (seen in 1969, published in 1973), concerns a vivacious Aboriginal nun, Sister Veronica, who feels responsible for a tragic fire at the Donjek Ridge School. She is encouraged to recover her spirits and teach again when the mission school is rebuilt.

His novel In the Navel of the Moon (D&M 1993) is set in the fictional Mexican border town of San Sebastian de Hidalgo (“my best work but a bust at the sales counter,” he noted). In Mexico, he said, he was known as ‘El Hombre Lobo’, the wolf man, “because, they say, I have pale eyes, hair on my face and pace around a lot.”

In 2002 he published a collection of observations and pronouncements called Old Enough to Know Better (Harbour), including some reminiscences of experiences as a Member of Parliament, newspaper columnist, police commissioner, father, wet-fly fisherman and wing shot.

In 2013, when he was not protesting heartily against the idiot world, Paul St. Pierre, at age ninety, opted to self-publish All is Well … Sort Of: Reports from Here, There, Yonder and The Hell and Gone Beyond of Big Brother’s Crusade against Oldspeak, Badthink and Political Incorrectitude.

He maintained a mobile trailer home in the Chilcotin, a home in Fort Langley and a third home in Sinaloa, Mexico. A visitor to his home in Fort Langley, affectionately described St. Pierre as “a half-naked old wildman drinking cheap red wine, checking e-mails and watching old b+w movies with 110-pound retriever Coco at his feet.”

“This guy wears British Columbia on his sleeve, and our collective imagination is the richer for it.” — Scott McIntyre, former D&M publisher

“There are so few masters of humour that he deserves a special award for giving us so much pleasure.” — Edith Iglauer, author

“Paul St. Pierre is a storyteller… in France or Germany they would erect a statue in his honour.” — Charles Lillard, critic