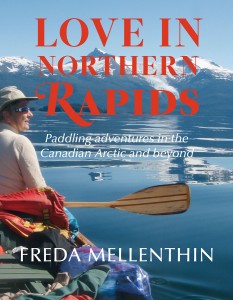 Love can bloom at any age. Seven years a widow, Freda Mellenthin wasn’t expecting, at age sixty-two, that Ted Mellenthin would show up on their first date with a canoe. As a whitewater veteran, he proceeded to encourage her to learn some basic paddling strokes. It was only a few months later that she found herself accompanying him for a 1200 kilometre paddle for six weeks in the summner of 1999. This date took them from northeast of Yellowknife to Baker Lake in Nunavut. Her memoir Love in Northern Rapids (Mission, B.C. Northern Rapids, $23.99 2014) recounts canoe trips over more than a dozen years on many arctic rivers and on the Beaufort Sea, as well as the Inside Passages in both B.C. and Alaska, the Sea of Cortez, and other waterways. Woven into the stories are the couple’s ups and downs of their growing relationship. 978-0-9939601-0-9

3 Responses to “Paddle to love”