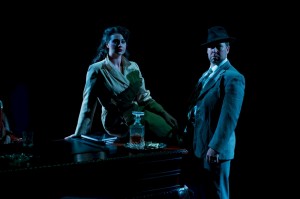 The Arts Club is not Tiger Woods. It’s not in free fall. So before we wring our hands and get all hot ‘n’ bothered about a second, artistic disappointment in a row—and before we proceed with the unpleasant task of telling you why its adaptation of Farewell, My Lovely is a second Raymond-Chandler-hybrid failure in a row, after the over-ballyhooed and now completely forgotten train wreck called Helen Lawrence—let’s take the charitable, long view.

Led by Bill Millerd since 1973, the Arts Club of Vancouver has produced nearly 100 original plays. The first homegrown box office success was Sherman Snukal’s Talking Dirty in 1981-82. To mark its 50th anniversary, the largest theatre company in Western Canada can now boast The Arts Club Anthology (Playwrights $24.95), a collection of six original plays produced by the Arts Club, edited by dramaturge and director Rachel Ditor. The anthology includes Anosh Irani’s The Matka King (workshopped at the Arts Club, where it premiered in 2003, directed by Bill Millerd), and four more scripts. It’s cause for celebration.

The Little Theatre That Could clearly can… May they produce 100 more.

But as soon as Aaron Bushkowsky’s adaptation of Raymond Chandler’s Farewell My Lovely opens with theme music that is recognizably James Bond lite, we get a clue that this co-produced adoption of the title—and the subsequent mangling of Chandler’s already obtuse plot—has little intention of staying true to the original.

Those first words out of detective Philip Marlowe’s mouth echo Martin Sheen uttering “Saigon. Shit.” at the opening of Apocalypse Now. Trouble is, the already convoluted storyline for Farewell, My Lovely (Chandler tossed together a composite of three, separately published stories), is telescoped here into conversations that occur in the detective’s office. We don’t get to witness the complicated back stories that give rise to the drama. The show does not deliver Los Angeles in the least. We stop caring about what happens next after about ten minutes, but the writing is not to blame. The clever jibes are there; the sexual playfulness is there. Aaron Bushkowsky is undoubtedly a talented writer. His new novel has been deservedly shortlisted for the Stephen Leacock Medal for Humour.

Unfortunately, with the exception of character actor Anthony F. Ingram in dual roles, the men in this show are basically weak. Beau Dixon as the looming heavy, Moose Malloy, is a wooden, non-menacing cutout. But the Achilles’ heal of this production is the casting of Graham Percy, essentially a comic, likeable actor, in the lead role. Throughout the evening, Percy plays Philip Marlow as a skittish nebbish. We don’t believe for one second that two gorgeous dames are going to fall madly in love with this guy.

Even though Emma Slipp gives it her best shot as the slinky good girl, Percy simply doesn’t respond; he is marooned in his strangely ineffectual gumshoe shtick. Meanwhile Jamie Konchak, who is credible as a scheming judge’s wife, is unconvincing in her dual role as a femme fatale. Without a brooding and manly Marlowe as a danger man, the romance and sex is completely hollow, mere artifice, and we don’t feel a thing.

The pop-gun violence in this production is equally lame. Bodies keel over with all the drama of a fallen lamp. The conceit that Marlowe drinks in nearly every scene is a mere homage to film noir, with decreasing impact. When an unshaven Robert Mitchum gets into his cups in the 1975 film, we believe he’s been knocking back the scotch; for two hours we know our emasculated Arts Club Marlowe is sipping water. Why bother?

There is a moment in this show when the curvaceous Slipp commences a torchlight song, ‘Cry Me a River,’ and we wake up. Are we finally going to get a transfusion of real emotion, a jolt of drama? But, no, director Craig Hall nips the performance in the bud. No sex or violence, please, we’re Western Canadian.This lack of consideration for the audience’s emotional needs reminded me of the extent to which bloated hubris sunk Helen Lawrence from the get-go. For god sakes, we want to feel something when we go to the theatre.

Co-opting film noir sounds like a good idea. George F. Walker did it a lot, didn’t he? But clearly Bushkowsky did not wake up in the middle of the night with a burning desire to generate a knock-off. This adaptation was somebody’s idea for a play; it was not derived from any passion to create. It’s marketable fluff. The audience goes home wishing they had rented the movie.

Spearheaded by Yvonne Firkins and Otto Lowy, the Arts Club was founded in 1958 as a private club for artists, musicians, actors and writers (including novelist Jane Rule). On the second floor of a converted gospel hall at 1181 Seymour Street, the Arts Club first produced Moss Hart’s Light Up the Sky in 1964 (the same year Jane Rule’s Desert of the Heart was published in England). The 650-seat Granville Island main stage on Granville Island was added in 1979; the 225-seat Arts Club Revue Theatre nearby opened in 1983; the refurbished Stanley Theatre at 12th and Granville re-opened as an Arts Club venue in 1998.

Long may they run.