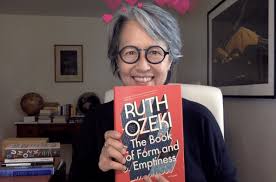 Novelist, filmmaker and Zen Buddhist priest, Ruth Ozeki received the 2022 Ethel Wilson Fiction Prize for her fourth novel, The Book of Form and Emptiness (Viking, 2021) at the 38th BC & Yukon Book Prizes gala on September 24. The novel features thirteen-year-old Benny Oh who starts to hear the objects and books in his house talk to him a year after his father dies. Ignoring the voices doesn’t work and Benny seeks solace in a public library. There, he meets and falls in love with a street artist who uses the library as her performance space. Benny also encounters a homeless philosopher-poet who encourages Benny to find his own voice. And Benny meets “his very own Book” – another talking object – that narrates Benny’s life and teaches him to listen to things that matter.

Unable to attend the gala in person, Ozeki, a Japanese-American, sent a written speech read out to the audience that praised Vancouver as the place she wrote her first novel after moving to Canada from New York in 1996 with her husband, Oliver Kellhammer.

“We lived in a little house on the alley at 646 1/2 East Cordova Street, a few blocks from Oppenheimer Park, in the area that was once Japantown, and perhaps that’s why I felt so comfortable,” Ozeki wrote. “The house overlooked the dumpster behind the Union Gospel Mission Thrift Store. It had once been a bicycle shop, belonging to a Japanese family who were forcibly relocated to the internment camp in New Denver during WWII.

“In 1996, Vancouver rents were still cheap, and for the first time in my life, I had health insurance, which gave me the security and freedom to write. Back in those days, before the Internet was a thing, you had to physically go to a library to do research, which I did, and that’s how I fell in love with the Vancouver Public Library. The VPL was where I researched that first novel, My Year of Meats, and it was an inspiration for The Book of Form and Emptiness, too.

“Later we moved to Whaletown, on Cortes Island, a place I love and which inspired subsequent novels, but I’ll never forget that first little house on the alley and how happy I was, living there and learning how to be a writer.”

Other award recipients at the 38th annual BC & Yukon Book Prizes include: 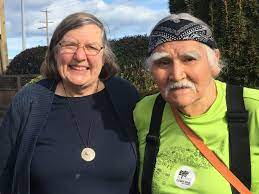