On Writing a Ukrainian Saga at This Time 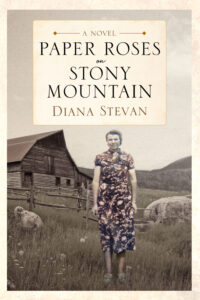 When I heard the news that Russia had invaded Ukraine on February 24, 2022, I was in the middle of revisions for Paper Roses on Stony Mountain (Island House Publishing, 2022)—the last book of a historical and biographical fiction trilogy, based on my Ukrainian grandmother and her family’s life in the old country and in Canada. Russia’s invasion tore me apart. Shocked, I sobbed uncontrollably, which surprised me. I wasn’t born in that part of the world, nor did I have any contact with any blood relatives still living in Ukraine. So why had I crumpled in tears?

Looking closer, I realized the unexpected war in Ukraine had hit my core because of my DNA and upbringing. But also because I’d been immersed in writing my baba and mother’s story for the last eight years.

I’m a first generation Ukrainian-Canadian, born and raised in Winnipeg. My father had immigrated to Canada in 1915 from Bukovina, the part of Ukraine then under Austrian rule, and my mother arrived on Canadian soil in 1929 from Volhynia, then under Polish occupation. 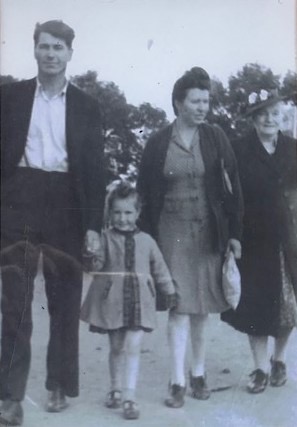 Diana Stevan, age four with her father, mother and baba, Lukia Mazurets, circa 1947 on their way to Assiniboine Park in Winnipeg, also known as City Park.

Since both my parents worked from dawn to dusk six days a week, baba, my Ukrainian grandmother, cared for me. I grew up steeped in the Ukrainian language and culture. Besides learning the folk songs sung after extended family events around the dining table, laden with traditional dishes, I attended Ukrainian language classes, Ukrainian Greek Orthodox church services, and later as a teenager, Ukrainian summer school. So, given my background, it’s not surprising I would grieve so deeply over a war in my parents’ birthplace.

Sunflowers Under Fire (Island House Publishing, 2019) the first book of my trilogy, takes place in the years 1915-1929 during Tsar Nicholas II’s reign. The story starts on a farm in Russia, what is now western Ukraine. With her children away and her husband gone off to fight in the Tsar’s army, Lukia Mazurets gives birth alone in a komorra, a cold storage room where she keeps barrels of sauerkraut and root vegetables. Soon after, she and her children are forced to flee the invading Germans. Over the next fourteen years, Lukia must rely on her wits and faith to survive  life in a refugee camp, the typhus epidemic, the Bolshevik revolution, unimaginable family losses, one daughter’s forbidden love, civil wars and the Polish occupation. It’s hard to fathom how my baba kept putting one foot in front of the other and yet, we’re seeing the same kind of strength from Ukrainians fighting today to hold on to their identity and independence. 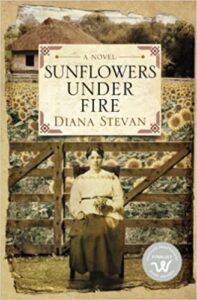 When I think back, I’m still surprised I embarked on writing Sunflowers Under Fire, a mammoth undertaking. Prior to working on this story, I had published two other novels, a romantic mystery and a psychological fiction. I had planned to continue writing women’s fiction, but then, one day, when I was telling my granddaughter Chloe another family anecdote, she said, “You should write your baba’s story.” It wasn’t the first time that had been suggested. My mother had often mentioned her life would make a good book, but I had dismissed the notion when she was alive. I’m not sure why. Perhaps I wasn’t ready. Chloe’s comment was the push I needed. And so, I began.

I had never written a historical fiction before, let alone a biographical one, but I knew I would have to do a lot of research. And that took much longer than I expected. Though I had over a hundred typed pages of my mother’s anecdotes, there were too many blanks in her recollections that I needed to fill in order to do justice to her story.

Researching my family’s past, and that time in history, proved challenging in a country set behind an iron curtain for decades. Writing about the land, I was helped somewhat by my photographs and memory of a 1988 trip I’d taken with my mother to her birthplace. Eager to learn more, I visited libraries in Vancouver, Toronto, Winnipeg, New York, and Stamford, Connecticut, which has an impressive Ukrainian library. I soaked up any text that covered the period beginning with my mother’s birth and ending with the year she and her family immigrated to Canada. I also consulted a professor of Slavic history at the University of Manitoba. Finding what I wanted and weaving it into my novel took over six years.

Along the way, I considered publishing my book as non-fiction, but in the end, I decided against it because I had to create too many supporting characters, places and conversations to bring my mother’s tales to life. Once my novel went to print, I thought I was done. But when Sunflowers Under Fire became a finalist for the Whistler Independent Book Awards and a semi-finalist for a Kindle Book Award, and readers asked for more, I picked up the story where I left off and wrote a sequel. 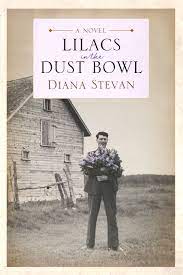 Lilacs in the Dust Bowl (Peregrine Publishing, 2021) tells the story of Lukia Mazurets and her children’s journey to Canada just before the stock market crashes and the Great Depression begins. Though these were grim times—trying to survive as immigrants in a country having trouble feeding its own—they found love and joy amid the heartache on the prairies.

Paper Roses on Stony Mountain continues the family saga, set during the latter years of the Dirty Thirties and the early years of World War II in Winnipeg, the federal penitentiary town of Stony Mountain, and on a farm nearby. In this story, I introduce another immigrant family, my father’s. His three brothers served overseas in World War II; two fought in Sicily, the third in the air. I was fortunate to have one uncle’s wartime diary as reference material.

Writing this family saga was an unexpected gift as it gave me the opportunity to revisit the family I love. I found myself crying and laughing with them as they went about their work in the fields and prayed for better times. Getting into their hearts and minds also gave me a greater appreciation of the sacrifices they made for the generations to come.

As a former family therapist, I know that a normal family is not a perfect Norman Rockwell painting. Each family encounters challenges and tries to show a brave face through unforeseen death and accidents, broken dreams, lost loves, mental illness, physical illness and drug addiction. And this is true of Lukia Mazurets (Mazurec) and her family. But what’s most inspiring is how they managed, despite what life threw them. That same Ukrainian spirit lives on in the world today. 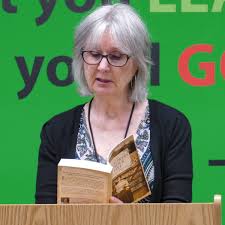