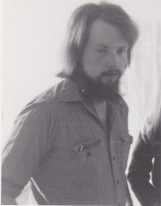 Born in Halifax on March 8, 1951, Robert Tyhurst attended St. Georges primary school in Westmount, Quebec, while his parents completed medical studies at McGill. The family moved west in 1957. Robert Tyhurst lived most of his life in Vancouver and Victoria. He was an anthropology student and teaching assistant at UBC throughout the 1970s, while developing strong poetic and musical skills. He backpacked through Latin America, and lived on B.C. Interior First Nations reserves while doing anthropological field work. Some of Tyhurst’s surreal-flavoured poetry was collected as a chapbook, House of Water (Caitlin 1981). He produced a much-cited PhD dissertation, “An Ethnographic History of the Chilcotin” and several reports for various provincial ministries. Later Tyhurst became a lawyer and worked on native land claims cases. He died suddenly on September 16, 2014 in Victoria. [Photo: Robert Tyhurst in 1974]