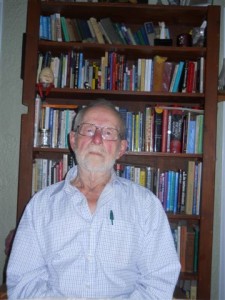 John Nesling was born in Ipswich, Suffolk, England in 1930. He emigrated to Canada from Australia, finally arriving in Vancouver in 1970. He has published three books: The Long Way Round (2006), Cold War (2014) and New Beginnings (2016). Nesling’s latest book, Cold War and Beyond, a Bystander’s Perception, is about the phenomenon of the Cold War from 1945 to 1991. The book attempts to make some sense out of history. As such, it is also a moral document. Nesling discovered that ‘history does not quite repeat itself, but it rhymes’ as Mark Twain so aptly stated. Chapter 9 attempts to speak on the problem of evil and the scapegoat principle with which we avoid it. Chapter 10 is about the awful inevitability of things. / Cold War and Beyond, a Bystander’s Perception. (2016 Island Blueprint) 978-0-9937401-0-7.