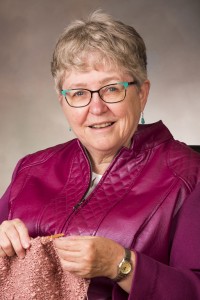 Dela Wilkins was born in Apeldoorn, the Netherlands, in 1949. She moved to Canada in 1953. She moved to British Columbia in 2005. Wilkins has been knitting, crocheting and sewing since she was 8 years old. Since 2010 she has focused on Tunisian crochet and has become a leading expert in the technique. Wilkins lives in Victoria, BC. Her book, Railway Knitting Workbook, The Journey Continues ($18.99 Friesen Press), is a guidebook to stitches and techniques in Tunisian crochet. Railway Knitting is one of the many nicknames for Tunisian crochet which is a blend of both knit and crochet techniques. This hands-on activity became part of the VIA Rail Artists on Board program on The Canadian, the train between Vancouver and Toronto, in 2011. 978-1-4602-5790-6.