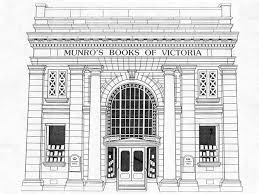 In a National Geographic book called Destinations of a Lifetime, Munro’s Books of Victoria has been listed third in a Top Ten list of bookstores around the world.

The entry reads, “In 1963, exactly a half century before she won the Nobel Prize in literature, Alice Munro co-founded a bookstore with her then husband, Jim. Munro’s has since moved into a magnificent, neoclassical former bank, decorated with gorgeous fabrics, in Old Town, Victoria, British Columbia.”

Fifth on the list is Powell’s Books in Portland. Other countries with bookstores on the list are Greece, Mexico, Argentina, France, Australia, China and Belgium. Jim Munro, now retired, was appointed to the Order of Canada soon after Alice Munro won her Nobel Prize in 2013. After her divorce in 1972, Alice Munro married former university friend, Gerald Fremlin, a geographer/cartographer, in 1976. Jim Munro married textile artist Carole Sabiston in 1977, and they remained in the Munro family’s Rockland house in Victoria. Fremlin died on April 17, 2013.

With her mother’s encouragement and consent, Sheila Munro, while living in Powell River, published an astute study of their family dynamics and her mother’s books, Lives of Mothers and Daughters (2001). Both Alice Munro and Sheila Munro worked in the family store.

Here is the National Geographic list from Destinations of a Lifetime

A decade ago, a group of friends from Cyprus, England, and the United States founded this bookshop, now in a gorgeous home overlooking the water in Oia, Santorini. The store has hosted readings on the terrace, bookbinding classes, and food and film festivals.

This beautiful Mexico City bookstore is large, light, and open, with sagging bookshelves flush with volumes in both Spanish and English and a pendulum suspended from the ceiling. Give it a nudge to trace your literary musings in the air.

El Ateneo’s magnificent Buenos Aires home used to serve as a performing arts theater, and it shows: The Grand Splendid has retained the ornate trappings, including frescoed ceilings and red stage curtains.

The flagship of the world’s largest independent bookstore chain stretches over an entire city block in downtown Portland. The color-coded rooms are stocked with a huge selection of used and new books; the store also hosts readings, story times for kids, and book groups.

Iowa City, home to renowned Iowa Writers’ Workshop, is drenched in literary life. Prairie Lights is arguably the hub of it all, with readings by star writers and up-and-comers and staffed by famed bookseller Paul Ingram.

With its 17th-century facade and rustic decorations, Shakespeare and Company of Paris is a font of old-world charm. It also has a vibrant history: It’s been a veritable home to such writers as Allen Ginsberg, Richard Wright, William Styron, and Langston Hughes.

In 1998, two new friends, inspired by the partnership of Gertrude Stein and Alice B. Toklas, decided to open a bookstore. Gertrude & Alice, a cozy shop that’s also home to a café, is now a neighborhood fixture in Sydney.

Housed in a former underground parking garage and bomb shelter, Librairie Avant-Garde has been transformed into the most beautiful bookstore in China. It also has a ton of reading chairs, so you can snuggle in for the afternoon.

Per its name, Cook & Book is a combination restaurant and bookstore near the Metro in Brussels. Nine different spaces offer their own distinct vibes, from a whimsical kids’ area to a room with books suspended from the ceiling.