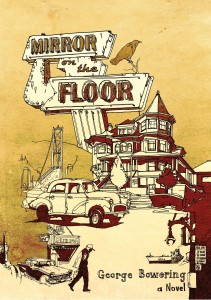 With a new introduction by his long-time friend Lionel Kearns, George Bowering’s first attempt at a novel, Mirror on the Floor (Anvil $18), set in Vancouver in the mid-1960s, has been re-released. It follows the carousing adventures of a UBC grad student named Bob Small and his roommate, George Delsing, as they encounter dockworkers, unemployed loggers and retired seamen on the Downtown Eastside, exploring the city in Small’s “poor old over-travelled yellow Morris Minor.” Outside the city lock-up, Small meets Andrea, a troubled young woman to whom he is attracted, and soon he is bumping into her everywhere he goes. Originally published in 1967 by McClelland and Stewart, Mirror on the Floor is now recommended as a vivid portrayal of Vancouver as it used to be–when it was little more than a provincial town with a rough waterfront. 978-1-927380-95-6