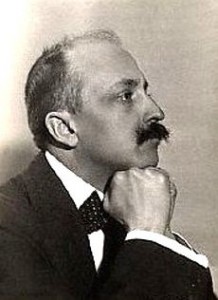 Richard Cavell, among other things, is the first Canadian to have taught Canadian Literature at the University of Padua. His interests in Italian culture in general, and literature and politics in particular, led him to write a fictionalized dramatization of the life of Filippo Tommaso Marinetti, a controversial figure often cited as the founder of Futurism, “the first global art movement.” Cavell’s unusual amalgam of history, criticism and fiction, Marinetti Dines with the High Command: A Manifesto and Five Aeropoems (Guernica $20 2014), emanates from a performance Marinetti gave at a dinner party in honour of the German High Command in 1938. It also underlines the hazards of mixing art and politics for the artist. Cavell asserts that Marinetti was not in thrall with the rising Nazis and he was far from being a disciple of Mussolini’s fascism. Marinetti born in Alexandria, Egypt, in 1876 and published his Futurist Manifesto in 1909, in France. “I published it in France,” Cavell has Marinetti say in his stage play, “because French was the language of culture, and it was the encrusted culture of the past that I wanted to attack.” Mussolini, wishing to assert that his fascism was distinct and even superior to Hitler’s National Socialism, wanted to support Futurism (and Marinetti) in an effort to make that claim. Consequently, when Marinetti died in 1944, Mussolini ordered a state funeral. Cavell’s book examines Marinetti’s life and character as being beyond fascism, and opposed to it. “The life of F.T. Marinetti,” he writes, “emblematizes the enormous creativity unleashed by the electric age, and its dystopian elements as well.” To his credit, Marinetti  publicly protested against anti-Semitism in 1938. In the same year he persuaded Mussolini not to allow Futurist art to be included in Adolf Hitler’s traveling exhibition of allegedly degenerate art. Marinetti most famously wrote, “Art, in fact, can be nothing but violence, cruelty, and injustice.” 978-155071-864-5     [PHOTO F.T. MARINETTI]