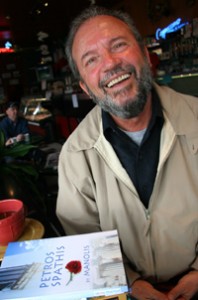 Originally written in Greek, Manolis’ lastest collection of poems, Autumn Leaves (Ekstasis $23.95) has been printed in an en face edition of Greek and English. Inspired by the French song of the same name, Autumn Leaves will be launched at the Arts Council of New Westminster’s Queen’s Park Art Gallery on Saturday, July 12, 1:30 – 3:30 p.m. along with Candice James’ collection, Purple Haze (Libros 2014). Autumn Leaves is about longing and desire. A sense of the transition from summer to winter permeates the poems.

Using the pen name Manolis, Manolis Aligizakis has written novels and numerous books of poetry, as well as articles and short stories in Greek and English. Born in the village of Kolibari on the island of Crete in 1947, Manolis Aligizakis moved with his family at a young age to Thessaloniki and then to Athens, where he received his Bachelor of Arts in Political Sciences from the Panteion University of Athens.

After graduating from the Panteion Supreme School of Athens, he served in the armed forces for two years and immigrated to Vancouver in 1973, after which he worked in several different jobs over the years. He attended Simon Fraser University for a year taking English Literature in a non-degree program. After working as an iron worker, train laborer, taxi driver, and stock broker, he now lives in White Rock.

Towards the end of 2006 he founded Libros Libertad, an independent publishing company with the goal of publishing literary books most other companies reject, thus giving voice to people who are not listened to by conventional publishers.

His translation George Seferis: Collected Poems was shortlisted for the Greek National Literary Awards, the highest literary recognition of Greece.