Poet and publisher Manolis Aligizakis has announced his most extraordinary book--a facsimile of his own handwritten version of Erotokritos, a romantic-epic poem composed by Vitzentzos Kornaros of Crete, a contemporary of William Shakespeare and Miguel de Cervantes. 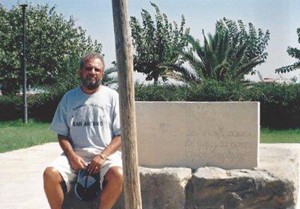 This work is being touted as, “The only longhand book of its kind–a long poem 500 years old–transcribed by an 11-year-old boy.”

Erotokritos by Vitzentzos Kornaros and Erophile (Eρωϕίλη) by Georgios Hortatzis, written around the same period, constitute the Renaissance of Greek literature. They are also considered the most important works of Cretan literature–“the backbone of Cretan literature,” according to Manolis–and are the poems upon which future poets relied, referred to and drew images from.

Announced on Manolis’ website for Libros Libertad press in January of 2015, this unusual publishing venture will constitute a limited print run of 100 copies, each to be autographed and dedicated by Manolis, for $5,000 per copy. The original handwritten version of the text was created in the summer of 1958 after his family moved from the suburb of Peristeri in Athens to Hagios Fanourios where his father managed to build their first family home in the north part of the suburb Ilion.

“During that summer my father brought home a copy of the most famous poem Erotokritos. I don’t remember where my father found the book, yet I remember he said I could read it and then he would return it to its owner. Knowing the difficult financial situation of those days and knowing it was almost impossible for us to buy such a book, I read it and day after day, page after page, I copied it…. I used two different colors of pen Bic, for those of us who remember those days.”

Almost sixty years later Manolis is publishing his hand-written version of the romantic-epic poem as a handwritten book. Only the final twelve verses of the 10,012 verses of fifteen syllables each in the Cretan dialect refer to the poet Vitzentzos Kornaros. According to Manolis, the central theme is the love between Erotokritos (referred to as Rotokritos or Rokritos) and Aretousa (referred to as Arete). Around this theme, revolve other themes such as honour, friendship, bravery and courage.

Born in the village of Kolibari on the island of Crete in 1947, Manolis Aligizakis moved with his family at a young age to Thessaloniki and then to Athens, where he received his Bachelor of Arts in Political Sciences from the Panteion University of Athens.

After graduating from the Panteion Supreme School of Athens, he served in the armed forces for two years and immigrated to Vancouver in 1973, after which he worked in several different jobs over the years. He attended Simon Fraser University for a year taking English Literature in a non-degree program. After working as an iron worker, train laborer, taxi driver, and stock broker, he now lives in White Rock.

Towards the end of 2006 he founded Libros Libertad, an independent publishing company in Surrey, B.C. with the goal of publishing literary books most other companies reject, thus giving voice to people who are not listened to by conventional publishers. The Orphans: An Anthology (Authorhouse, 2005). Poetry