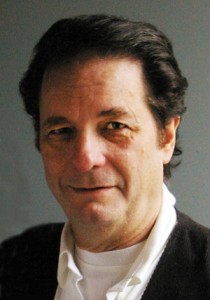 Prior to the appearance in October of his study of the life and works of Lewis Carroll, Decoding Wonderland, to mark the 150th anniversary of the publication of Alice’s Adventures in Wonderland , David Day (BA 1976 – Creative Writing) will receive a Distinguished Alumni Award, on February 4, at the Hotel Grand Pacific in Victoria, from UVic Libraries in conjunction with the UVic Alumni Association.

As well, the public is invited to a free public lecture by David Day about his forthcoming book, “Decoding Wonderland: Ancient Wisdom, a Forbidden Education and Real-Life Drama in Lewis Carroll’s Alice. In this presentation, Day looks at layers of meaning—philosophical, mathematical, classical and theosophical—encoded in the fairy tale. Day reveals all the characters in Wonderland to be actual Victorians, making the book a time capsule of Oxford when it was the centre of an historic point in human intellectual history. This free public lecture is presented in partnership with the Royal BC Museum, the Greater Victoria Public Library and the University of Victoria Libraries.

For an extensive overview of David Day’s literary career, see his entry on ABCBookWorld or visit www.daviddaybooks.com

According to press materials:

David Day is the author of more than 40 books of poetry, ecology, history, mythology, fantasy, and children’s literature. Internationally, he is best known for his literary criticism on J. R. R. Tolkien and his works. His books have won numerous literary awards and have been selected as “Books of the Year” by Time Magazine, New Scientist, Parents Magazine and the Observer. His books have sold over 4 million copies and have been translated into 20 languages.

Day, born and raised in Victoria, was a UVic Creative Writing graduate under the mentorship of Robin Skelton. His first book, ‘The Cowichan’ (based on his logging camp journals) was published in 1975. In 1976 he worked for the Toronto publisher, McClelland and Stewart, and two years later moved to London, England where he published ‘A Tolkien Bestiary’, the first of his six international best-sellers on the works of J.R.R. Tolkien.

Day’s landmark book on animal extinction, the ‘Doomsday Book of Animals’ with an introduction by the Duke of Edinburgh, was selected in 1981 as a ‘Book of the Year’ by Time Magazine. This was followed by ‘Whale War’ 1987, ‘Eco-Wars’ 1988, and ‘Noah’s Choice’ 1990. Day has also been an environmental columnist for Britain’s Daily Mail, Evening Standard, Mail on Sunday, Sunday Times and Punch Magazine.

In the 1994, he wrote the ‘Lost Animals’ British, a Japanese TV series of one hundred, five-minute documentaries on extinct species. It was narrated by Greta Scacchi and translated into 20 languages (currently on YouTube.) His ‘Whale War’ was also the basis of a British ITV documentary.

In 1994 and 1995, his ‘Tolkien’s Ring’ and ‘Quest for King Arthur’ appeared: two of the five books with academy award-winning artist, Alan Lee. And in 2000, Day was dramaturg for the Royal Birmingham Ballet’s millennium productions of ‘Arthur I’ and ‘Arthur II’.

Day has also written nine illustrated children’s books, while his children’s novel, ‘The Emperor’s Panda’, was runner-up for both the Governor General’s Award and the National Library Award.