A new memoir chronicles the impact of this illness on the lives of one couple. 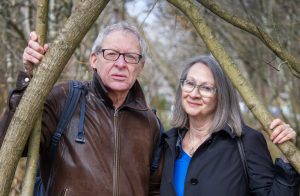 June Hutton and her husband Tony Wanless wrote the book together, leaving in his spelling mistakes, to shine a light on the disease’s effects.

When Tony Wanless, a successful newspaper reporter before he retired to freelance at 52, started acting strangely, his wife June Hutton suspected something was amiss.

Wanless put out his cigars in a potted plant with peat moss that started a small “bogfire;” he closed a barbecue cover without turning off the elements, melting the cover until it sealed the unit inside; and he jammed a suitcase he was packing with four umbrellas. The latter was a visual sign of cognitive looping, a mental health problem when the same things keep repeating themselves over and over again following the same order or process.

Sometimes, June would find lettuce in the freezer or dental floss in the fridge. Once, the toaster was wedged into the microwave oven.

Eventually, after many tests and medical appointments, Tony was given a medical diagnosis of Young-Onset Alzheimer’s. Both Hutton and Wanless couldn’t help wondering about all the past signs of the disease. The two decided to write a chronicle of the developing disease and how it impacted their lives, published this Fall, Four Umbrellas: A Couple’s Journey into Young-Onset Alzheimer’s (Dundurn $21.99). 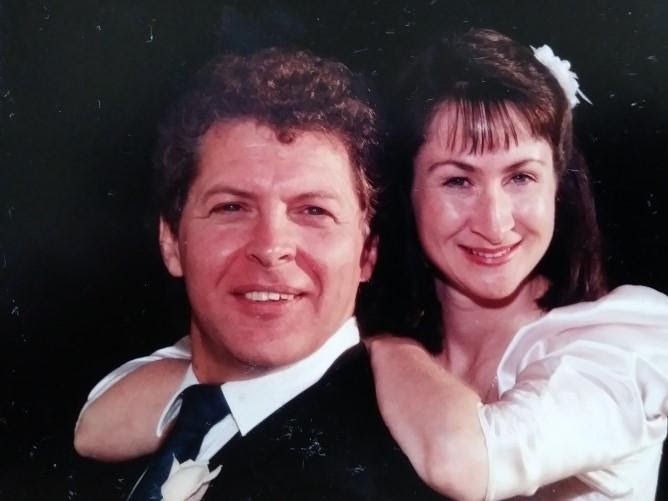 Tony and June on their wedding day.

It’s a heartbreaking look into how this disease gradually erodes memory, the ability to function and the impact it can have on a marriage.

Here, both June Hutton and Tony Wanless provide written responses to BCBookLook about the ordeal.

Please note that in the following answers from Tony, the spelling errors and other gaps are left uncorrected, as they were in his contributions in the book Four Umbrellas, as tangible evidence of the disease’s impact on this writer.

Briefly describe what Tony was like before any signs of the disease took effect and what endeared you to him?

June Hutton: Tony was exuberant, inquisitive and talkative. And God, he was smart. He was also a good writer and reporter, and had a great B.S. detector – he was quick to note when others were full of themselves. It was from Tony that I learned the word hubris. His vocabulary had always outstripped mine. He also liked to dance, and anyone who has ever had to drag a reluctant partner onto the dance floor knows what a plus that is.

Please describe the major signs that something terrible was wrong before you had a diagnosis e.g. leaving stove-top burners on, putting out cigars in plants and starting small fires. What was the most devastating sign?

June: Yes, he did all those things, and there are many more noted in Four Umbrellas, but perhaps the most devastating moment was when I realized there was no turning back, no getting back the old Tony, and that each time I think I’ve seen the “most devasting sign” I will go on to see another. The first of these was when he fell in 2011 and the noted string of incidents and mishaps began to multiply. I saw his fall as marking the point of no return to normal cognitive function. 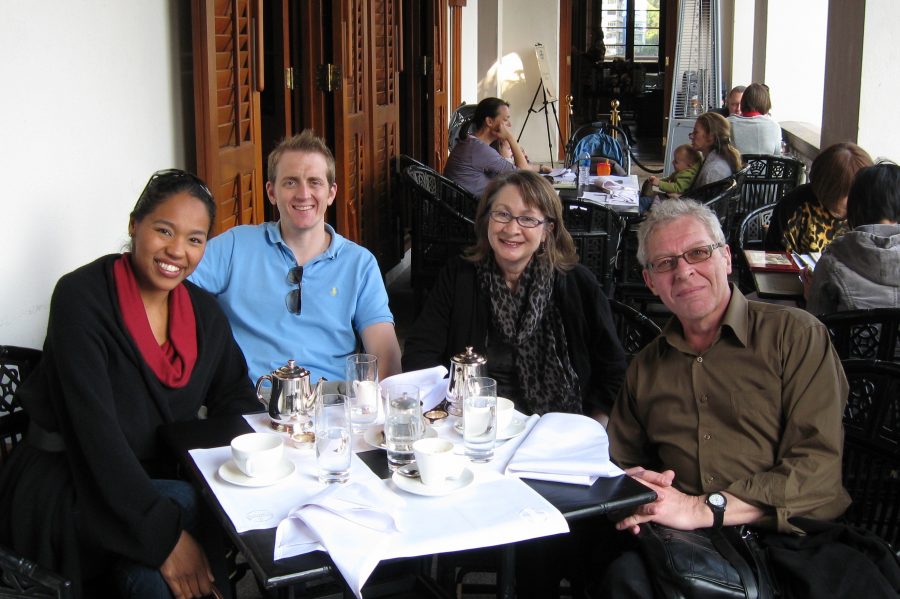 June and Tony with relatives in Kowloon, a few weeks before Tony’s fall that marked the end of his normal cognitive function.

Tony Wanless: To most devastating sign was when I one freelance job went south. The client hated what I wrote & complained vigorusly & her comment was: I thought I was hiring a great writtre & instead I got THIS! I had never heard that before. I was shocked but realized I had never done that before, ie faltered like that.

Once you began the long saga of medical tests, how difficult was it for you to accept that something life-shattering was about to begin? 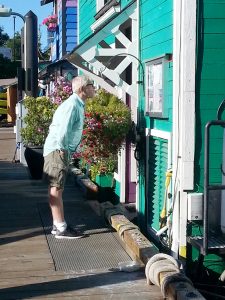 Tony: Initially I was shocked & did [not] believe it. I thought I would ace the test when I didn’t I didn’t and became aware that I couldn’t anser elementary questions or articulant my thoughts and bease I was devstated I thought briefly that my life was over and I would turn into some kind of helpless zombe (and other dire thouts.

Describe some of your challenges when faced with Tony’s steep decline?

June: I had to do everything on my own, from taking the car in for repairs to feeding the cats to paying the bills. If we ran out of milk I had to go get it, or, when it became uncomfortable for me to leave Tony alone, forego the milk until the next day. Small things like that would catch me off-guard, and leave me in tears. The partnership we once had is gone. I can’t talk to him the way we once did. In Four Umbrellas I mention the death of a family member, and how, with each arrival of cards and flowers, each phone call, Tony would ask, Did someone die? That repeated question gutted me each time, his inability to grieve with me, his inability to offer comfort.

How is Tony today? How are you i.e. what has been the toll on you personally? 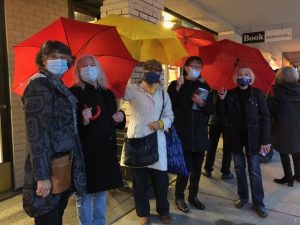 June: Tony is having more trouble with writing, and with his memory, short-term and long-term, now. The other day he asked me what was his surname at birth. It was Versteeg, and was his name until his teens when his mother remarried. Then just this week he was surprised that our older cat had to be given medication and had been in hospital for two days. Tony had no recollection of this. I feel for him in these moments. It must be absolutely frightening.

The toll on me is that often I am just plain tired. I don’t want to repeat things six times in a row. I don’t want to find the missing keys, mask, socks, broom, or whatever has disappeared that day. I don’t want to be mom to him any more than he wants to be my dependent. I am aware that caregivers take a cognitive hit from such a demanding role, and I quote some scary statistics in Four Umbrellas. Writing this book helped me examine the whole process, and allowed me to see that what we have gone through just might help others. What has been encouraging is hearing how many people have found their own stories in these pages. These exchanges with readers have been uplifting, to them as well, I hope. We know that we are not alone. Well, I seem to have anticipated the last question with this answer, so will turn it over to Tony, now.

Why did you write this memoir?

Tony: Partly to allay my worries about the future, and realize that in a way this was simply another part of life I may not have been happy about but could handle it re this stuff happens & there is no use in fiting it. 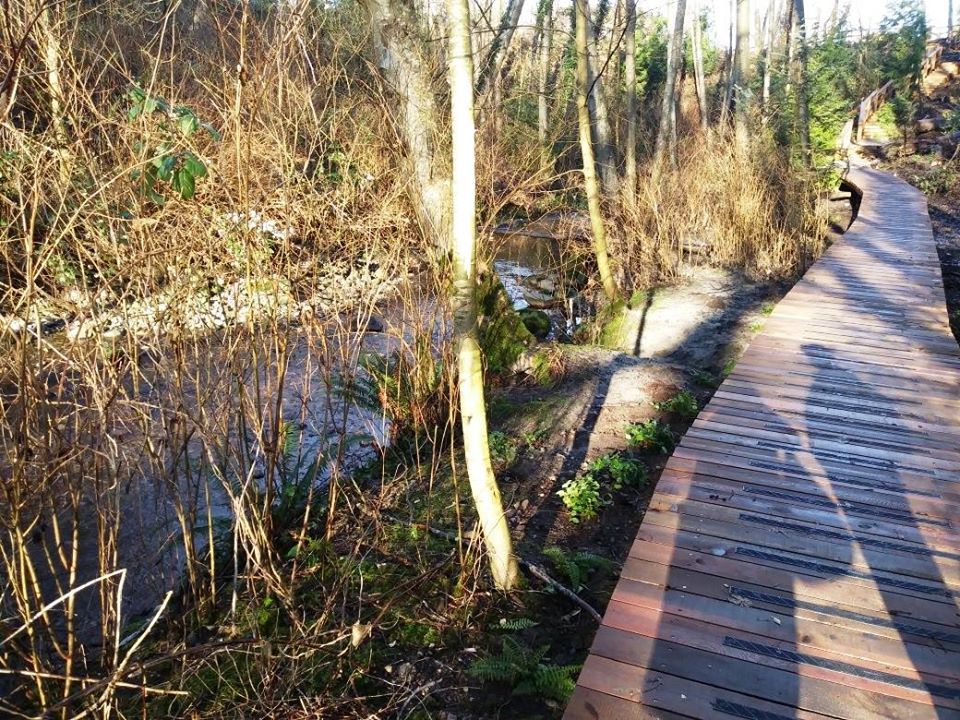 June and Tony’s shadows on a winter boardwalk.

An excerpt of Four Umbrellas: A Couple’s Journey into Young-Onset Alzheimer’s will be published in the Winter 2020 issue of BC BookWorld.