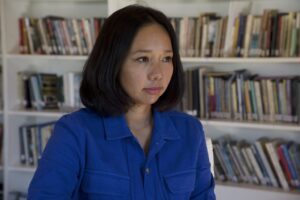 Tsering Yangzom Lama of Vancouver has published her debut novel, We Measure the Earth with our Bodies (McClelland & Stewart $24.95) a multi-generational story of a Tibetan family’s struggle to create new lives after China’s take-over of their country in the 1950s. Two sisters, Lhamo and Tenkyi begin their lives in exile by making the dangerous trek across the Himalayas to a refugee camp on the border of Nepal. The story follows Tenyki years later when she is separated from Lhamo and resides in Toronto. She lives with Lhamo’s daughter, Dolma who is caught between her own dreams and the need to help her community. The novel is a New York Times Summer Reads Pick and Lama has been named by CBC as one of the 30 writers to watch in 2022. 9780771047244