Lilly of the ravine 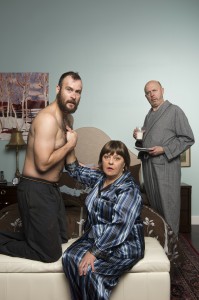 The way Nicola Cavendish can calmly hold the stage and enliven every line, maintaining warmth and dignity throughout, is a wondrous delight. But even the supremely talented Cavendish cannot redeem Colleen Murphy’s jawdroppingly cuckoo sit-com-turned-melodrama The Goodnight Bird. Landing Moby Dick with a flyrod would be easier.

The Goodnight Bird occurs entirely in the bedroom of a bored, older couple who have downsized to a condo. They are childless, but they have a cat. The caustic husband Morgan (Christopher Hunt) clings to his job and fails to successfully hide his girlie magazines. The bossy wife Lilly (Nicola Cavendish) enjoys owning some Group of Seven paintings and pestering her hubbie about remembering to lock the door, about keeping the bathroom clean.

The conceit of this play is that two people suffocating in their own safety need to be knocked for a loop in order to reawaken themselves. Morgan used to recite an Emily Dickinson poem when they were first together to get Lilly in the mood. Now he has forgotten the words. They haven’t had sex for a long, long time. The dialogue is sitcom nattering, missing only a laugh track to keep us from thinking we must be watching tv.

Then their cozy, cloistered bedroom is literally invaded by a flailing, stinking, bleeding, blithering madman—a homeless and deranged character named Parker who crashes onto their bed in a bloody stupour. The incoherent Parker sleeps in a ravine, worships nature and quotes Ralph Waldo Emerson.

Beyond implausible, this careening and chaotic character is a vehicle for Graham Cuthbertson to put himself into the running for Worst Performance of the Year. Director Roy Surette must be held partially culpable for allowing this nonsensical entertainment to have no emotional impact, but the fault chiefly lies with the script, likely commissioned to appeal to oldsters rather than written from the heart.

Only a few minutes after this burly and dangerous home invader has nearly frightened the mundane couple to death, Lilly is bringing him towels and fresh clothes, entering the bathroom when he is naked, and then chasing him around the room during a display of gratuitous male nudity that defies any theatrical logic. We abandon all hope that The Goodnight Bird will stay within any boundaries of credibility when Lilly is swayed by the lunatic’s ramblings.

Bizarre insertions of profane language don’t help. For the second act, Lilly disappears for five hours in the middle of the night to apparently have sex with crazy Parker in his ravine. She wants to pack her bag and live with him in the ravine.

The Goodnight Bird caroms crazily back and forth between the ridiculous and the hoped-for sublime when the playwright starts to drag up the couple’s past. Morgan says he has never cheated on Lilly, except for once. They tried to have kids; there were miscarriages. Such shortcuts to pathos are galling given the ludicrous action in the first act.

It gets downright saccharine when their beloved cat is found dead. Morgan cradles the cat corpse lovingly in his arms, as if it was a baby. As he cradles the cat, he recites all the words to the hitherto forgotten Emily Dickinson poem. It appears Chris Hunt, an estimable comic talent, has been directed to be Cavendish’s straight man, He deserves better. And so do we.

There is nobody to like in this play. The writing is undisciplined and on-the-nose. It’s like Stewart McLean took acid and dashed off a maudlin domestic crisis. This is not giving too much away. It is telling you to stay away.

[PHOTO: Is there a director in the house? Graham Cuthbertson, Nicola Cavendish, Christopher Hunt]