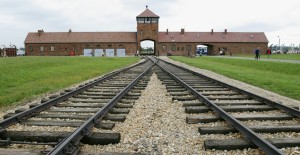 There are more than a few books by B.C. authors that pertain to the Holocaust.

Now, on the 70th anniversary of Auschwitz, we can add the names of two more Jews who have written Holcaust memoirs in B.C., Ernst Frinton and Rene Goldman Dr. Ernst Frinton (nee Arnost Frischler) published his Memories – An Autobiography back in 1994. There is a quotation (anonymous) on the book’s front page: “Memories are a person’s life – For we possess nothing certain except the past – which is always with us”.

Frinton was born of poor Jewish parents in 1917. His father was a cobbler, his mother repaired and altered clothing. He grew up in Ostrava, an industrial town of the then Czechoslovak Republic, with a complex mixture of Czech, German, Polish and Jewish residents. A popular student, he was involved in social-democratic activities and hoped to become a physician. With much sacrifice from the family he entered Medical School at the German University in Prague in 1935.

Frinton was in the third year of his studies when the Nazis took over the University. Frinton and his politically active friends had to flee the country. Upon his arrival in England, the British Committee for Refugees from Czechoslovakia placed him with a family in the countryside. He found a way to carry on his medical studies at St. Mungo’s College, one of the oldest medical schools in Glasgow. While still in school, he married Lili, herself a refugee from Berlin. She was looking after refugee children from Germany and Austria, a program financially supported by the Glasgow Jewish Community.

Dr. Frinton started in General Practice in the slums of Glasgow. In 1945, a few months after the war was over, the news came that his mother and sister had died in Auschwitz; his father never returned from the labor camp. Lili and Ernst’s first child was born in 1946. Next year the family moved to Liverpool where Frinton was offered an assistantship in a general practice. After two years, still not being able to find a medical practice with a future, they emigrated to Canada.

In Canada, Frinton accepted a coal mine union-funded medical position in the foothills of the Rocky Mountains in Alberta. After a slow start in 1949, a busy medical practice evolved. In 1950 the Frintons’ second child was born. Despite having endured and loved their time in Coal Valley, it was time to move on, and the family settled in the greater Vancouver area. Frinton and partners developed a busy general practice in the Cloverdale and Surrey area of the Lower Mainland – but by 1957 he was both exhausted and suffered from recurrent back pain.

Frinton decided to specialize in radiology. The family moved back to England, where Frinton started his two-year specialty studies at the Institute of Radiology in London. After a year Lili was expecting their third child, and they returned to Vancouver before the baby was due. Frinton completed his speciality training at St Paul’s Hospital in Vancouver and in the USA and settled into a busy radiology practice in New Westminster for the next twenty years, retiring in 1982.

Of his retirement years. Frinton writes: “So life goes on… I am happy that I have lived a long life… A good wife, three loving children, two beautiful granddaughters, many good friends, financial security… I often feel guilty to have all this while my parents and in particular, my younger sister, who was probably a better human being than I am, had to perish in misery… Life is not fair.” “Like many of my peers, I have over the decades written and spoken publicly in schools, universities, churches, about my personal experience as a child-survivor of the Shoah. My family and people of various walks of life have encouraged me to write my story. Thus motivated, I put pen to paper in the late evening of my life.”
BOOKS:

One Response to “Auschwitz anniversary reverberates”