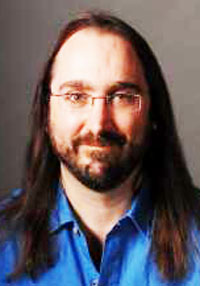 One of Vancouver’s most versatile writers, Mark Leiren-Young will be at the 2017 Whistler Writers Festival, which runs from October 12 – 15.  He has published work as a screenwriter, playwright, critic, performer and freelance journalist.

Leiren-Young’s latest book, The Killer Whale Who Changed the World (Greystone 2016) will soon be available in paperback. The book was first a radio documentary for CBC’s IDEAS, for which Leiren-Young won a Jack Webster Award for best radio documentary. Then he re-told the story for The Walrus magazine and finally, he was offered a book deal. Now, the book will be available as a paperback by the end of August.

Leiren-Young told BC Bookworld in 2016 that the killer whale story haunted him for decades before he was able to bring it to life: “Just over twenty years ago one of my heroes, Sea Shepherd captain Paul Watson, told me the story of Moby Doll – the first killer whale displayed in captivity,” he said. “Ever since then I’ve been chasing this whale’s tale like Ahab chased his great white.”

Below is an excerpt from the 2016 BC BookWorld book review by Jaiden Dembo:

After he was appointed head of the Vancouver Public Aquarium in 1955, Murray Newman hatched plans to hunt and kill an orca in order to create a perfect model replica for the Aquarium’s proposed expansion in 1963. Commissioned to kill a killer whale, sculptor Samuel Burich harpooned and shot at one but it did not die.

In The Killer Whale Who Changed the World, Leiren-Young recalls there was a moment when the Vancouver Public Aquarium’s team could have killed the orca but empathy intervened. Leading the orca back to Vancouver like a dog on a leash, the team nicknamed it Hound Dog, probably after the Elvis Presley song.

Once in Vancouver the only place they could keep it was the Burrard Yarrows Dry Dock. On the one day the public was allowed to see the whale, crowds flocked to see the ferocious beast and soon realized that this apex predator was not the monster they had originally thought it to be.

The captors mistakenly decided the orca was female. Renamed Moby Doll, he/she galvanized the attention of the world. When he/she was eventually moved to a pen at Jericho, some local citizens and the SPCA pleaded for the whale to be released. The first killer whale in captivity, Leiren-Young writes, had launched the first anti-captivity activists.

Months after her capture, Moby Doll died in captivity, drowning in the brackish waters due to exhaustion and low salinity in the harbour, at which time Moby Doll was determined to be masculine. His death broke the hearts of those he had played with, splashing them and eating out of their hands. Samuel Burich, the man who had tried to kill Moby Doll, had sung back to him and whistled to mimic his chirps and squeals.

The city of Vancouver and the world mourned the whale’s death. Leiren-Young recounts how Moby Doll’s death sparked a desire to learn more about these creatures and a global desire to favour conservation over killing.

Equally witty and entertaining as it is informative, The Killer Whale Who Changed the World is a captivating captivity story of adventure, heart-warming moments between mammals, and ultimately heartbreak. An array of newspaper articles, reports and anecdotes from important figures of the time are supplied to help take the reader back in time.

Moby Doll’s story changed the way we see these animals forever. An obituary in The Times of London stated, the widespread publicity some of it the first positive press ever about killer whales marked the beginning of an important change in the public attitude toward the species.