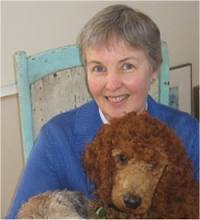 Here is Kit Pearson’s acceptance speech when she received the 11th annual Lieutenant Governor’s Award for Literary Excellence in 2014 at the BC Book Prizes gala. She thanks, among others, her former mentor Sheila A. Egoff, “a wise, sometimes cranky, and utterly devoted advocate of children’s literature… Sheila’s high standards for writing made sure that my reach would always exceed my grasp.” Thank you for this very great honour. When I was at the book prize gala in Victoria last year, my partner Katherine and I found ourselves seated across from the Lt Gov. We quickly discovered that we all had dogs, and that her honour missed hers very much. Somehow, during the course of the evening, Katherine ended up inviting her honour’s dogs to stay at our house.

Thus when I received a phone call from her honour in February my first surprised thought was that she meant to take us up on this offer! Of course she didn’t (although our poodle would welcome her dogs any time!). She was telling me the absolutely thrilling news I’d been honoured with this award.

Last year was a milestone because a writer for children, Sarah Ellis, received this award for the first time.   Now that it has once again gone to a children’s writer, perhaps it can be stated that writers for the young have finally – at least in B.C.! – been recognized as being on the same level as those who write for adults.

Actually, we have never been very different. In fact, there is more difference between, for example, being a poet for adults and a non-fiction writer for adults than there is between being a novelist in either the adult or children’s genre. What this award recognizes is that I am simply a novelist – a novelist whose audience happens to be children. I struggle with the same problems as any other fiction writer.

Here, for example, are some of the questions about my current novel that wake me up at night: How much am I allowed to fictionalize real people from history? Shall I use the present or the past tense? After writing for thirty years, why can’t I find fresh ways to describe someone crying? And why, or why, do I keep repeating the same sentences, such as, “There was an awkward silence.” Every novelist is challenged by similar questions.

The content of my books isn’t much different from adult books, either. Going to boarding school, being trapped by war, having a difficult mother, worrying about a mentally ill brother, trying to keep important secrets, even travelling back in time: these are all topics that have been covered in adult literature. Even the fact that my protagonists are aged nine to thirteen isn’t different: there are innumerable adult novels about the difficulties of being young in an adult world. The only difference is one– my intended audience, which is older children and young teens. This means that I write with a kind of double vision, seeing the world through the eyes of, say, an eleven-year-old girl, but interpreting the story from an adult’s point of view. I have a responsibility for my readers that writers for adults don’t have to worry about: I have to make sure that, no matter how grown up my subject, I am clearly presenting it in a way that takes into account children’s inexperience both in reading and in living.

Apart from this one difference, writers for children and writers for adults share the same passion for words and stories, whether fictional or true. As Margaret Laurence famously said, writers are a tribe. I feel very privileged to belong to the B.C. branch of that tribe.

I would like to end with some thank yous. Thank you to my family and friends for your loving support, especially to my beloved partner Katherine Farris. Thank you to my three publishers: Harper Collins Canada, who nominated me for this award, Penguin Books Canada, and Scholastic Canada. Thank you to the committee and jury for all their hard work. Thank you to all of you who bring books and readers together. Thank you to my fellow children’s writers and illustrators for your friendship and inspiration over all these years. And one more thank you, to a person whose spirit is hovering in this room: a wise, sometimes cranky, and utterly devoted advocate of children’s literature: my former mentor, Sheila Egoff. Sheila’s high standards for writing made sure that my reach would always exceed my grasp; and she would be so proud that I am receiving this award. Kit Pearson was born in Edmonton in 1947. She attended UBC and worked as a children’s librarian in St. Catherines, North York and Burnaby for ten years prior to receiving the Canadian Library Association Book of the Year Award, the Mr. Christie’s Book Award and the Geoffrey Bilson for Historical Fiction for Young People Prize for The Sky Is Falling (1989), the first of three novels about two English children evacuated to Canada to escape the bombing of World War II. Looking at the Moon (1991) and The Lights Go On Again (1993) complete the trilogy. Pearson’s A Handful of Time (1987) won a Canadian Library Association Book of the Year Award and was preceded a year earlier by her first book, The Daring Game.