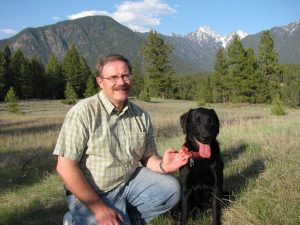 There’s a well-known story in Cranbrook about elephants escaping from a circus in 1926, and fleeing into the nearby woods. Eventually rounded up and put back to work, one of the elephants continues to inspire news stories for years afterwards and the episode enters town folklore for generations. Not so for the one-armed hockey goalie from nearby Kimberly, Jimmie Peever, who helped his team win the Coy Cup in the same year, beating the Vancouver Seaforths in a symbol of provincial supremacy. Peever was also an elite baseball player, another sport that usually requires use of both arms. Yet, somehow these feats have disappeared into the mist of time as all records of Peever end in 1928. Now Cranbrook author, Keith Powell remedies this oversight with his new historical novel, In the Shadow of Elephants: The Life and Times of Jimmie Peever, one armed goalie and baseball player and a herd of unruly elephants (Wild Horse Creek Press $21.95). Mixing fact and fiction, Powell lets his central character reveal historical events in the Kootenays, from the super-secretive P-9 heavy-water project in Trail to the Japanese internment camps of the Slocan Valley. In the Shadows of Elephants is Keith Powell’s fourth historical novel. 9780981214641