In the Valleys of the Noble Beyond: In Search of the Sasquatch
by John Zada

John Zada’s “Noble Beyond” is the Great Bear Rainforest, “the largest tract of intact coastal temperate rain forest in the world — one so rich and prolific that it supports more organic matter per square metre than any other place on earth.” It occupies the British Columbia coast for 400 kilometres from Vancouver Island to the Alaska panhandle. The inlets and the archipelago of small islands have a coastline of 50,000 km. It is “an environment so complex, and so possessed of intelligence that to be in it is to be subsumed into a living, breathing thing.” No residents are more captivating that the Spirit Bear, a white, non-albino version of a black/brown bear that is found only in the forests and salmon streams there.

The Great Bear Rainforest. Government of BC map

In forestry argot, it was once called the “Mid and North Coast Timber Supply Area.” The name Great Bear Rainforest was invented by Peter and Ian McAllister in 2006 when environmentalists fought to save the forest from clearcutting. In 2016, 85 percent was saved. At the same time the Northern Gateway pipeline was stopped, at least temporarily.

John Zada spent months exploring the Great Bear “in search of the Sasquatch,” the humanoid great ape, six to ten feet tall, covered with hair, intimidatingly muscular, with broad shoulders and a pointed head. Sasquatches have a powerful smell and screech loudly. Encounters are frequent. The trouble is that the Sasquatches’ existence has not been proven beyond doubt. Tracks are seen and cast but no skeletal remains, or specimens living or dead, have ever been produced to the satisfaction of the scientific community. If the Sasquatch doesn’t exist, how do we make sense of encounters in the Great Bear and throughout the west coast of North America? That is the question.

John Bindernagel was a wildlife Biology student at Guelph University in 1963. He was “grabbed” by the Sasquatch idea, but his colleagues laughed at him, and his professor dismissed the Sasquatch as a hoax. So John devoted himself to finding the Sasquatch. His books and articles were largely ignored. He inspired Zada’s exploration. “The question no longer is: Does the Sasquatch exist? It exists. The question is why is it scientifically taboo?”

There are eyewitness accounts too convincing to be dismissed. Here’s one from Maclean’s magazine in 1929:

I was startled to see what I took to be a bear crouched upon a boulder…. As I raised my rifle to shoot it, the creature stood up and let out a piercing yell. It was a man — a giant six and one half feet in height and covered with hair. He jumped to the ground. I fled, but not before I felt his breath upon my cheek.

Perhaps the best known “encounter” is the chance sighting that was filmed by Roger Patterson and Bob Gimlin in “Bluff Creek” northern California in 1967. The half-minute film shows a Sasquatch striding into the forest. Although Hollywood special effects people said the film wasn’t faked, in 2012 Bob Heironimus admitted that he was the man in the bigfoot suit in 1967. His motive for coming out was that the filmmakers never paid him the promised $1,000 to impersonate the beast. Although YouTube footage shows Bob’s unmistakable monster stride, the filmmakers are still cashing in $10,000 from TV networks to show their 30-second film clip. Score one for logical positivism, downright empiricism, and the inevitable exposure of opportunistic conmen. 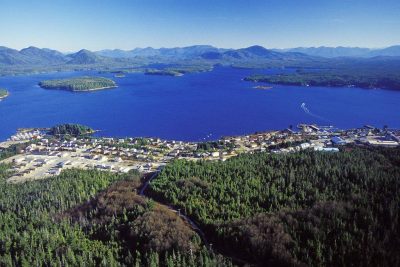 The Heiltsuk community of Bella Bella (Waglisla) on Campbell Island, with the Coast Range in the distance. Photo courtesy of Facebook

In Bella Bella, Zada meets people of the Heiltsuk Nation, and gets a forceful reminder of the depth of their relationship with the land and the sea. Chevron is proposing an LNG plant in Kitimat, which means that tankers will be in the Inside Passage. At a meeting, the suited and polished Chevron reps make a slick greenwashing presentation which meets with a united front of resistance. “We live off this land…This is all we have…If there’s as spill, who will help us?…What will we do?” The Chevron people are humbled and retreat quietly.

It was not long before this that a U.S.- based tugboat, the Nathan E. Stewart, carrying 200,000 litres of diesel oil crashed into the rocks off Athlone Island, in October 2016. The spill severely damaged the clam, crab, and herring-egg harvest.

There’s a moving account of a potlatch that includes a funeral. It takes over the Heiltsuk community for three days. Ritual and ceremony call on centuries-old traditions.

At the end of his stay in Bella Bella, Zada hikes up to the reservoir and meets an elder.

“There’s kids playing up there by the dam…kinda worried one of them animals will get them.”
“What animals?”
“Bears,” he says, “or maybe Sasquatches.”
“Sasquatches?”
“Yeah. You can hear them sometimes screaming from the mountain…They take that trail into town and look into people’s houses – like a peeping tom – looking at women.”

“For a moment,” writes Zada, “I feel lost, without bearings, set upon a fruitless meandering trajectory in search of rumours and visions.” 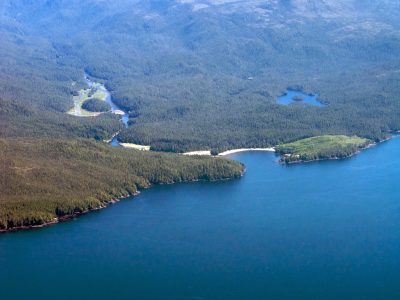 South now to Koeye, in a valley that “glowed with a mesmerizing, otherworldly, fluorescent green.” It’s the home of the Wuikinuxw Nation. At a youth camp there are stories of recent Sasquatch encounters. “Three of the camp’s teenage counsellors had claimed to see a giant broad shouldered humanoid watching them in the light of the full moon.” Another encounter includes “roar-like screams…and the sound of a large stick being struck against a tree.”

“Believe me,” says Rob Duncan, conservationist, “when I say that the Sasquatch is here, it’s always around.”

There are a couple of distress calls from campers surrounded by bears. Captain Brian Falconer, an ex bush pilot now doing ecological research, rescues them. 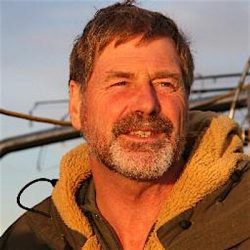 When asked why he is driven to stop every bit of industrial development on this coast, Brian says, “Because there’s nothing like this left anywhere in the world. This is a fabulously intact working ecosystem that’s evolved over centuries in complete harmony…Everywhere I go the hands of humans have erased these kinds of places. They’re gone …. Once you’ve been here – seen it, felt it, touched it — your life’s changed forever.”

Alex Chartrand Junior patrols Owikeno Lake enforcing the ban on grizzly hunters. Zada is keen on seeing the Hoodoo Valley, so he goes along on a Guardian Watchman patrol. Nobody goes into the Hoodoo Valley any more. Logging shows have always met with disaster. Nobody will go in to retrieve valuable abandoned equipment. Lance McGill says, “ We both felt something horrible…. Even weirder was this sort of presence I felt. It was so negative that we decided to cut the job short and just leave.”

Does Alex take Zada in? No. Is there an explanation for the Hoodoo curse? Yes. Is it plausible? You decide.

Ocean Falls gets five times as much rain as Vancouver. “You should see it when it comes down full tilt, when the rain bounces two feet in the air,” says Darell Becker, aka Darellbear, purveyor of miracle ointments. “Once you’ve experienced that … the rain’s made you its own…. You become one of us.”

Zada’s visit to the Rain People does not yield much Sasquatch lore, but there is good discussion. Glenna has lived there the longest. “If I can’t touch something,” she says, “I don’t believe in it.”

So the Sasquatch is an apparition, an incorporeal entity?

There is no Sasquatch tradition in Ocean Falls. It was a pulp mill town, population 5,000. The mill shut down in 1980 and the place was gradually abandoned except for caretakers and diehards. Then people started moving in and restoring some of the decaying buildings, notably the lodge taken over by Rob Darke and renamed “Darke Waters.”

Long speculation leads Zada to think that the Sasquatch occupies a “middle ground … between ‘It exists’ and ‘It doesn’t exist,’ where components of truth most often reside.”

On a hike, he is jolted by a sort of epiphany. “… I realize I’m staring into the eyes of what looks to be a Sasquatch — one of my mind’s rendering — hewn from the forest … and radiant with the presence of the surrounding wilderness.”

While reading this, I kept falling back on Hamlet’s immortal (if clichéd) observation that, “There are more things in heaven and earth, Horatio, than are dreamt of in your philosophy.”

Bella Coola, beyond the western edge of the Chilcotin Plateau, is “the epicentre of all things Sasquatch.” Let’s see if a visit here yields any definite conclusions.

Leonard Ellis is a bear hunter who bought up grizzly licenses and turned conservationist. His cabin on Stillwater Lake was once the home of legendary Ralph Edwards, Crusoe of Lonesome Lake, who saved the trumpeter swans. Leonard, son Daniel, and their dog lead Zada on a gruelling hike up the Atnarko River. Will they make it over the jagged rocks and down an avalanche chute? Do they encounter grizzlies? (“She’s gonna charge us, Dad! Shoot ‘er!”) Sasquatches? What about Leonard’s injured knee? A suspenseful tale indeed, and a fitting climax to the book.

So are there “really” Sasquatches? Zada does not produce a body to satisfy the logical positivists, but let’s give the last word to Darellbear:

The Great Bear Rainforest, this whole coast is the Noble Beyond. This is the land of serendipity, man. The ultimate landscape of myth, magic, and metaphor. The domain that is the unseen universe. Interconnection and deeper meanings lie around every corner. It’s where your Sasquatch, your coincidences and a million other possibilities exist… This whole business of you finding a Sasquatch – that’s bullshit. Exists? Doesn’t exist? You’re never going to know. Besides, that’s not even the point. 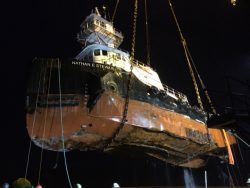